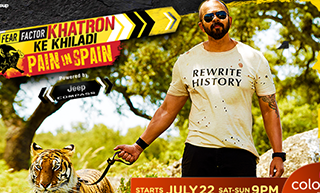 Mumbai, 18th July 2017: To fight fear, one must face it head-on, go through innumerable encounters and use courage and determination as ammunition to conquer it. 12 apprehensive contestants made their way to Spain, where they were challenged with harsh weather and extreme stunts on a difficulty meter that was soaring high.

Reigning God of Action Rohit Shetty redefined Darr at every step for the contestants with death-defying manoeuvres and nail biting acts that promise to take viewers on an unprecedented adrenalin-filled ride. However – the mere mortals who were at Rohit’s command had their own stories tell – Rithvik Dhanjani, Karan Wahi and Ravi Dubey’s notorious antics; Shibani Dandekar, Geeta Phogat and Monica Dogra’s unusual friendship; Manveer Gurjar’s devil-may-care attitude; Nia Sharma and Shantanu Maheshwari’s never-ending swag; Hina Khan’s musical shenanigans; Shiny Doshi’s innocence and Lopamudra Raut’s make-up woes have become this season’s biggest talking points! And now, they’re all set to share their action-packed experience with the world as COLORS launches Khatron Ke Khiladi powered by Jeep Compass every Saturday and Sunday at 9:00pm starting 22nd July 2017. Produced by Endemol Shine India, this season of Khatron Ke Khiladi will be a true journey of fears and daredevilry, filled with edginess and anxiety that will show Spain and the khiladis in new light!

Commenting on the launch of the newest season of the show, Raj Nayak, COO – Viacom18said, “Be it Rising Star or India Banega Manch, we strive to raise the bar of reality shows on Indian television; Khatron Ke Khiladi has been a flagship show on COLORS and we are looking forward to this edition that promises edge of the seat entertainment for the whole family. We would also like to welcome, for the first time, Jeep Compass as the powered by sponsors; we hope that this association will help create strong brand synergies.”

Host Rohit Shetty not only played the role of a taskmaster enhancing the contestants’ troubles but also served as a disciplinarian keeping a constant check on their performances. The exceptional chemistry amongst the contestants will see them motivate each other to cross the finish line for every task and also make way for quirky moments that will keep the audience entertained throughout the season.

Elaborating further, Manisha Sharma, Programming Head – COLORS said, “Viewers always look forward to new destination every year and Spain is touted to be one of the most adventurous and beautiful destinations. With the return of Rohit Shetty and new mix of contestants we will raise the bar of the show. This season’s contestants have proven to be a surprise package, especially the women; they’ve been go-getters whose energy levels and sharp minds have made them formidable competitors. With all the parts of the puzzle fitting in perfectly, we are all set to roll out an edgier and entertaining extravaganza called Khatron Ke Khiladi!”

Speaking about his experience as the host, Rohit Shetty said, “Returning to Khatron Ke Khiladi after 2 years, I was prepared to increase the intensity of stunt levels to challenge the contestants and they’ve risen to the occasion and proven to be serious contenders. Their never-say-die attitude was impressive, especially their dedication to give 100% for every stunt. I am confident that this season of Khatron Ke Khiladi is going to surpass all previous ones.

Deepak Dhar, Managing Director & CEO – Endemol Shine India further added saying, “Khatron Ke Khiladi is a colossal entertainer which presents the viewers with never seen before action. This year too we have amped up the stunts for the contestants. With every new season the team at Endemol Shine scales up the energy to bring alive the true essence of fear through high intensity visuals and to take viewers on an unprecedented joyride.”

COLORS has planned a series of marketing initiatives across print, cable and DTH, radio, electronic media, OOH, and social media platforms to promote the show.  On the digital front, the channel has planned exclusive bloggers meets and experientials for the online community, as well as contestant-driven social media challenges. A specially created Khatron Ke Khiladi smart app on Facebook will give viewers updates about the show and their favorite contestants. Additionally, customised Spain postcards will be posted on COLORS’ social media platforms to keep viewers updated about the stunts’ destination every week.

Witness the contestants challenge their sensibilities on Khatron Ke Khiladi
starting 22nd July, 2017, every Saturday and Sunday at 9:00 PM only on COLORS!