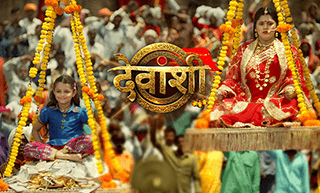 A child’s trust with a God-woman & her journey to uncover the blind faith syndrome
COLORS throws light on yet another societal issue through a powerful narrative, Devanshi

~ Starting 3rd October 2016, Devanshi will question the unfounded belief systems,
Every Monday to Friday at 7:00 PM on COLORS ~

Mumbai, 27th September 2016:
“She’s a child who holds the power to give a soul to the universe, wings to the mind, and flight to imagination, because her intentions are as good as the universe’.” Played up by her mother and caged by blind beliefs in the name of ultimate power, little Devanshi battles various ups and downs in an attempt to abolish evil. In a country of many belief systems, COLORS presents a never-seen-before concept, Devanshi, a classic tale of good triumphing over evil. The show highlights the erroneous assertion of god-women which further compels an innocent child to live through tumultuous relationships touted to prepare her for the ‘greater good’. Produced by Full House Media Pvt. Ltd., Devanshi is a fresh concept focussing on the life of a 7-year-old girl whose life changes when she’s accidentally dropped into a god-woman’s ‘hundi’ as an infant, and faces the brunt of being a blessed child. Devanshi will fight to eradicate conventional belief systems starting 3rd October 2016, every Monday to Friday at 7:00 PM on COLORS.

Commenting on the launch of the show, Manisha Sharma, Programming Head – COLORS said, “Religious prejudice in the name of God and faith has created a void in our country’s growth. With Devanshi, COLORS mirrors this hard hitting reality to present a novel and unexplored concept that puts the spotlight on fraudulent practices conducted in the name of devotion. Narrating a tale about a child and a god-woman, the show is in line with our endeavor to deliver well-meaning content while allowing us to experiment with our programming lineup. As Devanshi’s journey of good vs. evil takes over the 7:00 PM slot on COLORS, Thapki…Pyaar Ki will continue to engage viewers at a brand-new timeslot of 6:30 PM.”

Highlighting the thin line between true faith and blind faith basis which many godmen and women in this country take unsuspecting people for a ride, Devanshi will focus on the larger thought of good versus evil drawing inspiration loosely from the age old tale of Krishna – Kansa. Devanshi is the story of how a twist of fate causes a new born baby’s destiny to become about defeating the evil God woman, Mata Kusum Sundari (played by Karuna Pandey), who rules big in the name of faith over the people of a fictitious town named Jwalapuri (in Haryana). When the young baby falls into the temple hundi accidentally, Mata Kusum Sundari in keeping with the customs of the temple, declares the baby to have become temple property and subsequently goes on to hand over the responsibility of raising the child to an infertile couple, Sarla (played by Ankita Sharma) and Omi (played by Pankaj Bhatia) who are the chief sevaks at the temple. Little does she know, however, that 7 years later, certain circumstances which are the result of her own past karmas will catapult the now grown up Devanshi (played by Kashvi Kothari) into being heralded as Ghungroo wali mayya ka avatar by the same people of the town who had made Mata Kusum Sundari god-like.

Elaborating about the show further, producer Sonali Jaffer from Full House Media Pvt. Ltd.said, “Devanshi emphasizes on the underlying message of good vs. evil. The story focuses on a 7-year-old girl, who is the universe’s vessel to triumph over negative elements or a negative situation. As the story unfolds, viewers will be shocked to see how the mindset of a young girl will reform the fate of many and dismiss those led astray by blind faith. While the story is based in a fictitious small-town, named Jwalapuri, in Haryana, we have gone to great lengths to ensure that the authenticity of the context and backdrop is maintained throughout the narrative.”

Speaking about her character Kusum Sundari, actor Karuna Pandey said, “Devanshi focuses on a very diverse aspect of the society that continues to prevail in our nation and showcases it through the eyes of a young girl. The show’s concept emboldened by COLORS’ storytelling prowess grabbed my attention when this show was offered to me. Kusum Sundar’s character has incredible strengths and I believe that it will prove to be a huge milestone in my career. In fact, I believe that the overall casting is very precise. The intensity with which young Kashvi Kothari has portrayed the role of Devanshi is praiseworthy. I look forward to the audience’s response to our attempt to deliver something as unconventional as this show.”

Bringing life to the key characters embroiled in Devanshi’s saga will be some of the most prominent faces from the industry. Along with Kashvi Kothari and Karuna Pandey, the show will also feature superlative actors like Ankita Sharma as Sarla (Devanshi’s step mother), Pankaj Bhatia as Omi (Devanshi’s step father), and Aamir Dalvi as Mohan (Kusum Sundari’s aide), amongst many others.

To witness the epic battle between self-belief and blind faith, don’t miss Devanshi starting 3rd October 2016, every Monday to Friday at 7:00 PM on COLORS