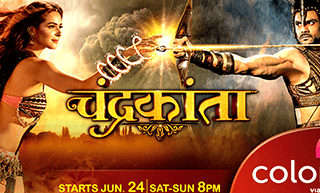 Mumbai, 14th June 2017: As viewers prepare to bid adieu to the unprecedented leader on Indian television, Naagin 2, COLORS is all set to launch a fantastical tale of love and revenge portrayed against the backdrop of magic and mysticism, Chandrakanta. Promising to be a visual treat and every fantasy lover’s delight, Chandrakanta will showcase an epic power struggle between two rival Aiyaar kingdoms, Vijaygarh and Suryagarh. Putting the spotlight on the conflicting yet fervid relationship between princess Chandrakanta (Madhurima Tuli) and prince Veer (Vishal Aditya Singh), the show is laden with myths, legends and magic. Chandrakanta, produced by Ekta Kapoor’s Balaji Telefilms, will mystify audiences starting 24th June 2017, every Saturday and Sunday at 8:00 PM on COLORS.

Commenting on the launch of the show, Raj Nayak, COO – Viacom18 said, “For two back-to-back seasons Naagin has enjoyed the status of being a favorite of the viewers. It’s their confidence in our content that has allowed us to explore this genre further. The recent success of costume dramas and fantasy offerings not only on television but also in films is a testimony that our viewers have evolved, and is willing to explore different narratives. We are thrilled to collaborate with Ekta Kapoor’s creative intellect yet again to showcase a unique rendition of a story which, though has been narrated before, leaves a lot of scope for creating a cohesive viewing experience.”

Chandrakanta narrates the tale of Vijaygarh’s lost princess who lost her family and kingdom to a power war waged by Naugarh’s evil Queen Iravati (Urvashi Dholakia). While many believed the family to be wiped out, an infant Chandrakanta was found in a river by a simple and loving aiyaar fishing couple in Suryagarh. Her true identity lost in the war, Chandrakanta grows up to be a strong warrior-like woman, whose focus and strong determination are unparalleled. But, her real journey starts when she crosses paths with Queen Iravati’s son, Prince Veerendra Singh, who finds himself enamored by Chandrakanta’s entrancing beauty and falls hopelessly in love with her when he comes to battle Suryagarh’s Prince Shivdutt (Shaad Randhawa).

Speaking about the new fiction offering, Manisha Sharma, Programming Head – COLORSsaid, “As a channel, we are committed to bringing viewers a variety of entertainment – be it Naagin, now Chandrakanta or the upcoming Mahakaali that makes for edgy yet pacier story telling as compared to the daily fiction dramas. The success of Naagin tells us that viewers still have a huge appetite for this genre and with Chandrakanta, we are scaling up every aspect of the show and making it as spectacular and thrilling as ever. True to the ethos of the channel that offers differentiated content, be it weekdays or on the weekend – we hope that this enchanting story will be enjoyed by the audiences as much as Naagin was.”

Said Producer Ekta Kapoor from Balaji Telefilms at the launch, “Chandrakanta is a very special show for us and it has very big shoes to fill. That said, we were filled with excitement over the prospect of creating this show. The plot is gritty, complex, passionate and is laced with top class VFX which will transport the viewers into alternate reality. We hope that Naagin’s ardent viewers and voracious fantasy-fiction aficionados enjoy watching Chandrakanta and support this mammoth venture.”

Get ready to embark on a mystical journey with Chandrakanta, starting 24th June 2017, every Saturday and Sunday at 8:00 PM on COLORS