Media
A tale of true love and nameless relationships 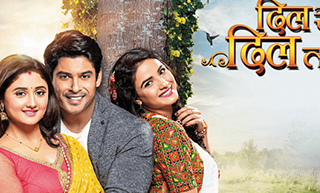 Mumbai, 18th January 2017: Highlighting the complex dynamics of human relationships, COLORS brings to its viewers its first offering of 2017, Dil Se Dil Tak. The story traces the lives of much-in-love married couple, Parth (Sidharth Shukla) and Shorvori Bhanushali (Rashmi Desai) and their disparities with their family who opposes their inter-cultural marriage. However, fate has something else planned for them as their lives get intertwined with Teni (Jasmin Bhasin) making way for unforeseen obstacles challenging their destinies. Produced by Shashi Sumeet Productions, Dil Se Dil Tak will showcase the intricacies of human relationships starting 30th January, 2017 and air every Monday to Friday at 10:30 PM on COLORS

Commenting on the launch of the show, Manisha Sharma, Programming Head – COLORSsaid, “The most interesting relationships are those which we never expect to be in, yet their importance in our lives cannot remain unacknowledged. Dil Se Dil Tak showcases that some emotions are evoked by relationships that are unnamed; relationships that are brought to us by destiny. With this show, COLORS reunites with Shashi Sumeet Productions to narrate the story of Parth and Shorvori as unforeseen complications in their married life ties their fate with Teni. The stark differences in their culture and upbringing make for many interesting trysts that promise to leave a lasting impact on the hearts and minds of the audience.”

Set against the culturally rich Gujarati backdrop of Baroda, Dil Se Dil Tak recollects the journey of newly married couple, Shorvori and Parth Bhanushali whose love for each other and their families transcends all boundaries. Owing to Shorvori’s Bengali roots and contrasting backgrounds, she finds herself rejected by Parth’s family. But the power of love keeps them together and gives them the impetus to lead a happy life. But, it is when a chance visit to a temple to pray for each other’s and their family’s wellbeing that their incomplete destinies are tied together with Teni, a spunky ex-bar dancer who believes that her future, and lots of money, lies for her in the US. Despite typical Gujarati demeanour and thick accent, Teni cultivates a relationship with Parth and Shorvori which they cannot acknowledge or describe to their family. Her association with them, though, is for a reason that they hope will reunite them with their family.

Speaking about the show further, producer Sumeet Mittal of Shashi Sumeet Productions Ltd. said, “With Dil Se Dil Tak, we are looking at highlighting those unconventional relationships that are created and sustained owing to certain life experiences which most people are uncomfortable talking about. The storyline focuses on not only a love-filled relationship shared by a husband and his wife, but also society’s judgement of other bonds that they might foster. Given the topic that we are exploring, we have roped in seasoned actors like Sidharth Shukla, Rashmi Desai and Jasmin Bhasin owing to their ability to convincingly portray even the most complicated characters on television. This is our second association with COLORS and, together, we have gone above and beyond in terms of scale and production quality to add authenticity to the concept and relating the emotions that an untagged relationship brings with it.”

Commenting on portraying Parth’s character, actor Sidharth Shukla said, “Dil Se Dil Tak’s narrative speaks about the mutual trust and respect that captures a heart, entwining two souls together forever. Parth is a family-oriented man who is willing to go to any extent to bring a smile on Shorvori’s face and happiness to his family. It is this trait of his personality that makes him truly endearing; he only seeks the happiness of his beloved ones.”
Speaking about essaying Shorvori, actor Rashmi Desai said, “Happiness often sneaks in a door you did not even know existed, making the greatest things also the most unexpected. Deeply in love, Shorvori also acknowledges that her marriage to Parth has damaged his relationship with his family, and she really wants to repair it. With her dedication to go to any length for Parth and his family’s happiness, she hopes to reunite them some day.”
Adding further, Jasmin Bhasin aka Teni said, “Teni has only one motivation – to live a life free of obligations with loads of money in it and be happy finally because she has suffered a lot in past. She believes that moving to a different country will help her out. But, unknown to her, her destiny is tied to Parth and Shorvori, and this inadvertently brings her close to the Bhanushali family.”

COLORS has devised an extensive 360-degree integrated marketing and digital campaign for Dil Se Dil Tak reaching out to the show’s target audience at various touchpoints on conventional platforms and social media.

What is destiny’s plan for Shorvori, Parth and Teni? Will their relationship find a name?
Watch Dil Se Dil Tak to find out…
Starting January 30th, 2017, Monday to Friday at 10:30 pm only on COLORS