Media
Action, Adrenalin and Arjun – This season of Khatron Ke Khiladi will entertain you like never before 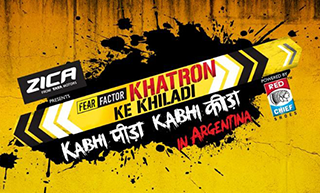 Mumbai, 27th January, 2016: Every day we wake up with the hope of battling all our fears. But very few gather the strength to look fear straight in the eye and nail it! The 14 promising contestants of this Season of Fear Factor Khatron Ke Khiladi have done exactly that. Whether it was the scare of hissing snakes on their bodies or dunking their heads inside a box full of worms, jumping off from running vehicles, speed in cars to survive a blast, battling with fire, allow deadly spiders and reptiles walk all over their face, pick slithering snakes using the mouth, walk the tight rope from scary heights – the daredevils of the Season have done it all! And to make their lives a little more precarious was Arjun Kapoor – the fun, friendly and fearless host who loved doing keeda at every possible juncture. Capturing moments of sanity and insanity, anxiety and withdrawals, fun and laughter, bruises and breakdowns, presenting an all-new season of ZICA from Tata Motors presents Khatron Ke Khiladi – Kabhi Peeda Kabhi Keeda in Argentina with 14 celebrity entertainers and Arjun Kapoor; all set to premiere on Saturday, 30th January, 2016 and will air every weekend at 9:00 PM on COLORS.

Commenting on the launch of the newest season of the show, Raj Nayak, CEO – COLORS said, “We have kicked-off the year on a high with the closure of another successful season of Bigg Boss where the choicest celebrities were camping in a house away from prying eyes. And now, with Khatron Ke Khiladi – Kabhi Peeda Kabhi Keeda, it’s time for viewers to bear witness to their favourite celebrities facing their fears and performing stunts in the same timeslot on weekends. Making the show’s experience more personal for viewers, we will be launching ‘Khatron Ke Khiladi – The Game’ which will urge players to overcome their fears and dodge high-speed obstacles keeping them engaged through levels of adventure-filled gameplay.”

Giving Argentina a flavour of India, Arjun Kapoor will be seen making every member of the show, including the Argentinian crew dance to his desi tunes. A change in the format will see the contestants being split into two teams, turning the competition into an open battle field right from the start and raising the bar of the season with each passing episode. Breaking the pattern from the earlier Seasons, the current one will see first time host Arjun Kapoor do a lot of fun, masti and Keedas to give peedas to the contestants and keep the viewers amused with his trademark humour.

Adding further, Manisha Sharma, Programming Head – COLORS said, “This year we have incorporated a new twist in the show’s format by dividing the contestants into two teams. Their perseverance was put to test as they had to not only compete against each other but also play for each other whether or not they liked it. We have had some very interesting revelations about each of them. The most timid ones surprised us with their grit and determination. As a host Arjun Kapoor surpassed all our expectations not only as an entertainer but also as a motivator at every level of difficulty. It was exciting to see the contestants fight all their fears to come out as strong performers.”

Speaking about his experience as a first-time host, Arjun Kapoor said, “While I have hosted live events and award shows in the past, the thrilling ride of being a host for a reality show like Khatron Ke Khiladi – Kabhi Peeda Kabhi Keeda with 14 gifted participants was a completely different ball game altogether. But at the end every bit of the effort was worth the pain and turmoil…especially because I had the opportunity to add my brand of mischievousness and ‘keeda’ to stunts whenever possible. Shooting for the show and interacting with the contestants has been a memorable experience for me and I certainly hope that it will translate into a well-packed fun-filled season for the viewers as well.”

Speaking about what’s in-store this season, Deepak Dhar, Managing Director, Endemol Shine India said, “With more than 100 people working tirelessly to bring alive the ‘Kabhi Peeda Kabhi Keeda’ theme of Khatron Ke Khiladi this season, it’s one of our most promising seasons thus far. An all-new location like Argentina and an exciting gen-next host Arjun Kapoor, have served as the perfect setting for our teams to up the entertainment quotient. Keeping in tune with the theme and the 14 eager participants, we have introduced a volley of surprises to create edge-of-seat moments for viewers and the unsuspecting Khiladis alike.”

According to Ms. Delna Alvari, Head – Marketing Communications & Service, Passenger Vehicles Business Unit, Tata Motors said, “We continue to work with our partners to create interesting properties for our customer as a part of our Madeforgreat campaign. This is a step towards yet another offering and are delighted to work with COLORS. The concept of Khatron Ke Khiladi is to push oneself to overcome new challenges, which resonates with our values as well. With the start of an exciting year for Tata Motors with new products and multiple customer engagement initiatives, planned under our #madeforgreat campaign, we have started the brand transformation journey.”

To promote the show, COLORS has planned an extensive integrated marketing campaign across mediums including print, cable and DTH, radio, electronic media, OOH, cinema, etc. The channel has also planned on-ground activations in sync with the COLORS Golden Petal Club in 9 cities across Uttar Pradesh. In Mumbai, special Khatron Ke Khiladi announcements are being made on Western Railways and Metros. A robust digital outreach will keep the buzz surrounding the property alive on social media platforms including Facebook, Twitter, Instagram and YouTube among other platforms. The channel is also launching ‘Khatron Ke Khiladi – The Game’, a pacey and thrilling action adventure game, developed by Hungama Gameshastra Pvt. Ltd, challenging players through a stunt-ridden obstacle course requiring them to take down other contestants. With a user-friendly interface having Tilt-Based Control Scheme, the game will be available on Android and iOS platforms and will create an unparalleled cinematic experience with its dynamic gameplay. Players will also be able to share their performance through social media features like Facebook sharing and Leaderboards.

For this season of Khatron Ke Khiladi, COLORS has roped in ZICA from Tata Motors as the Presenting Sponsors and Red Chief Shoes as the Powered By Sponsors.