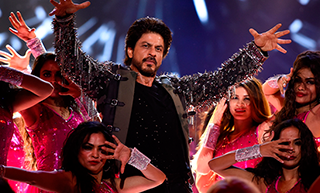 Mumbai, 19th December, 2016: Entertainment was the flavor of the evening as more than 150 of the Indian film industry’s technical stalwarts and artistes graced the 14th Sansui COLORS Stardust Awards. Joining hands to celebrate and applaud the sweat and hard work of the film fraternity in 2016, the awards brought the entire industry under one roof in a joyous event at the Reliance Jio Gardens at BKC in Mumbai. The ceremony extolled both the commercial successes and critically acclaimed movies that left a substantial mark in 2016. As the biggest and most credible awards were presented to deserving winners, the glitzy night of the Sansui COLORS Stardust Awards scaled the peaks of entertainment amidst many spectacular performances from the most happening faces of Bollywood.Sansui COLORS Stardust Awards will entertain television viewers on 8th January 2017 on COLORS.

The evening was brought alive by hosts Abhishek Bachchan, Riteish Deshmukh, Farah Khan and Maniesh Paul, who rocked the stage with their unique brand of humour leaving audiences in splits. Some truly visually magnificent performances amplified the entertainment quotient manifold through blockbuster performances that celebrated the year gone by. While Bollywood’s effervescent superstar Shah Rukh Khan added his magic touch to the evening with a memorable dedication to some of his all-time favourite leading ladies, Ranbir Kapoor recreated the angst of one-sided love on-stage a special ‘Ae Dil Hai Mushkil’-themed act. Tributes took centre-stage as Jacqueline Fernandez paid homage to the excellence of melody queen Asha Bhosale and Parineeti Chopra honoured her internationally sensational cousin Priyanka Chopra with a power-packed performance. A first-time performance on stage was by Romanian beauty Iulia Vantur whose special singing and dance-based act to Salman Khan’s hit number ‘Main Hoon Hero…Tera’ created waves. Sushant Singh Rajput, further, stepped it up a notch as he celebrated all the Best Choreography nominations. And, singing their way into the audiences’ hearts were Himesh Reshammiya and Diljit Dosanjh as they, individually, crooned to some of their superhit songs.

The Sansui COLORS Stardust Awards recognized winners across more than 27 categoriesincluding Editor’s Choice, Reader’s Choice Awards and Special Awards. Ae Dil Hai Mushkilwalked away with the most number of awards (6), and Amitabh Bachchan for Pink and Anushka Sharma for Ae Dil Hai Mushkil and Sultan were handpicked by Stardust’s readers as the Best Actor of the Year (Male) and (Female) respectively. The Editor’s Choice Awardssaw Neerja being adjudged as the Film of the Year, and Aniruddha Roy Chowdhury for Pinkand Ram Madhvani for Neerja as the Filmmaker of the Year. Special Awards were presented to Rekha (Lifetime Achievement Award), Priyanka Chopra (Global Icon of the Year), Asha Bhosale (The Living Legend), Aishwarya Rai Bachchan for Sarbjit (Iconic Role of the Year), Varun Dhawan (Superstar of the Next Generation) and Ajay Devgn for Shivaay (Breaking VFX and Direction).

On the digital front, COLORS brought the action from Red Carpet of the Sansui COLORS Stardust Awards LIVE to Facebook audiences through a specially-created Facebook Live Room hosted by Meiyang Chang. All the celebrities walking the red carpet found themselves in the line of fire of some quirky and fiery questions that raised the entertainment quotient for Bollywood’s eager fans waiting for an opportunity to interact with their favourite actors and filmmakers.

Keep watching as 2016 draws to a close with blockbuster celebrations,

and 2017 kick-starts with a big bang!
The 14th Sansui COLORS Stardust Awards will be televised on 8th January 2017 on COLORS!

About ‘VIACOM 18’:
Viacom 18 Media Pvt. Ltd. is one of India’s fastest growing entertainment networks and a house of iconic brands that offers multi-platform, multi-generational and multicultural brand experiences. A joint venture of Viacom Inc. and the Network18 Group, Viacom18 defines entertainment in India by touching people on air, online, on ground, in shop and through its cinema.
About Sansui
Sansui’s inception took place in 1947 in Tokyo, Japan. The company found faith at an enviable pace thus enjoying its presence in more than 100 countries. Sansui started its India operations in year 1997 and owing to its ground breaking technologies, today Sansui prides itself in being a house-hold consumer electronics brand in India. Sansui is one of the most advanced technological brand in the country, with a reputation for new age technology and excellent after sales service. Sansui has marked its presence across all major towns and cities of India.

As the world moved from CTVs to LCDs to LEDs, Sansui has emerged with the latest technologies like Curved 4K Ultra HD, 4K Ultra HD, Smart, WHAM, and SOEN Sound for its LED TVs range. With consistent dedication to quality, technology and unmatched customer satisfaction, Sansui ensures a life enriched with innovation.