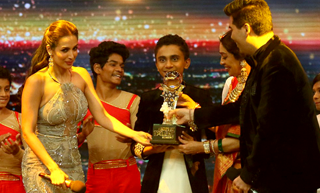 Mumbai, 9th July 2016: After months of intense competition and inspiring performances, COLORS’ premier talent-based reality show India’s Got Talent came to a close tonight amongst much fanfare. From the array of extraordinary performances and mind-numbing acts, young flautist Suleiman emerged as the first ever winner from Amritsar on India’s Got Talent. As Suleiman basked in the glory of achieving a monumental feat, he walked away with a cash prize of Rs. 50 Lakhs, a Maruti Suzuki Celerio car and a specially crafted trophy engraved with the signatures of jury members Kirron Kher, Malaika Arora Khan and Karan Johar. The finale was a grand extravaganza infused with an array of amazing performances and heartwarming comments by the special guests and jury. Motivating and cheering the outstanding performances put forth by the finalists were 24: Season 2’s Jai Singh Rathod aka Anil Kapoor, and the Dishoom cast Varun Dhawan, Jacqueline Fernandez and John Abraham.

Being a golden buzzer semi-finalist, Suleiman was one of the few contestants who won the hearts of all the judges from the very beginning. Suleiman is the disciple of the maestro Pandit Hariprasad Chaurasia and nurtured his talent under his guidance. With his roots in Amritsar, the talented boy is a young enthusiast who learnt to play the flute at the tender age of 3. Along with the flute, his father also taught him how to play the tabla, keyboard, harmonium, and guitar. Suleiman’s music has an ethereal and divine quality which never fails to amaze people when they listen to every rendition creating a sense of awe for his talent. Flute is an instrument which is deeply connected with the Indian culture. Suleiman’s victory has not only resurfaced an old Indian form of art but also helped flute gain global recognition. His simplicity and sincerity has made him one of the most loved contestants of India’s Got Talent, and it comes as no surprise that he has emerged as the winner.

Elated about his win, Suleiman said, “Winning India’s Got Talent is my biggest achievement as it made my father’s dream come true. The show has given me a platform to showcase my talent in front of the world and the opportunity to pursue my talent further. Firstly, special thanks to my father and all my gurus, especially Pandit Hariprasad Chaurasiaji without whom I wouldn’t have reached at this stage. I would like to thank my well-wishers, supporters, and the jury for their constant love and support.”

Speaking about the show, Manisha Sharma, Programming Head – COLORS, said, “India’s Got Talent continues to draw eyeballs season after season is the  biggest testimony of the incredible talent that our country is home to and their ability to entertain the world. This season, we went beyond all previous benchmarks by including elements like the Checkered Floor and Spotlight amongst others which helped us discover extraordinary talent. India’s Got Talent has received a great response from viewers as well as auditioning contestants and this inspires us to come back with a larger-than-life theme every year. I am very happy that people of our country are supporting an art which has a close connect to our culture. Suleiman is truly deserving and I’m happy that the audience made the right decision by voting for him. We would like to extend our heartiest congratulations to Suleiman on his win and wish him luck for future endeavors.”

Celebrating a successful run of the show, judge Karan Johar said, “India’s Got Talent, this season, was truly extraordinary; there were just too many marvelous acts that we’ve experienced. The contestants have not only lived up to our expectations but also managed to astonish us with their great caliber. I wish all of them luck for the future; they have the potential to go places!” Commenting on this season, Kirron Kher said, “I always go through a conflict of emotions at the end of every season; it’s difficult to bid adieu and wait for the next season to kick off. This time around, the show has been a rollercoaster ride filled with some great moments and superlative performances from all across the country. I would like to congratulate Suleiman on his momentous win, I feel very proud to say that he belongs to Amritsar which is very close to my heart and has given a new recognition to the place. ”Judge Malaika Arora said, “The contestants who performed on the India’s Got Talent stage this year not only showcased tremendous energy but also managed to infuse energy into us. Watching them perform in front of us, every time has been a thrilling and fulfilling experience. Suleiman is a true gem, his talent mesmerizes me each time I hear him play. This show is like family to me and I’m going to miss it a lot till we come back again.”

During the course of the Grand Finale, the jury added to the excitement as they wholeheartedly  participated in the evening’s festivities as the fabulous trio Kirron Kher, Karan Johar and Malaika Arora presented a special performance especially for this season’s superiors contestants. Along with this, the finalists also put their best foot forward and showcased their talent. 24: Season 2’s Jai Singh Rathod aka Anil Kapoor made a grand entry on the stage and added to the finalists’ stress levels as he announced the Top 5 of the season. The star-studded Grand Finale further witnessed the presence of the cast of upcoming film Dishoom including actors Varun Dhawan, Jacqueline Fernandez and John Abraham. The special guests were astonished by the caliber of the finalists and rooted for them with great vigor. Varun Dhawan also wrote a special composition and rapped it along with host Bharti Singh. The magical evening came to a blockbuster close when Suleiman was announced as the winner, the moment brought joy and happiness to all those who supported him.