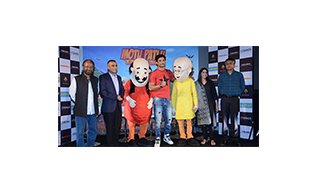 Viacom18 raises the bar for kid’s content in India;
Launches its maiden animation theatrical, Motu Patlu King of Kings
~ Partners with MAYA to tap into the burgeoning animation industry ~

Mumbai, September 8, 2016: Viacom18 is set to take the Indian animation industry to greater heights with the release of Motu Patlu King of Kings – the network’s maiden 3D stereoscopic animation theatrical. Two hugely successful divisions from the Viacom18 Network – Viacom18 Motion Pictures and Nickelodeon have joined hands to create the movie based on the very popular Lotpot characters Motu Patlu. The movie, produced by MAYA, will create a new milestone for Indian animation by promoting India’s vision of ‘Made In India’ content. The movie is slated to release on 14th October 2016, in Hindi and Tamil in over 700 screens across India.

Since its inception, Motu and Patlu have enjoyed a sweet spot in the minds of children and have over time become a phenomenal success for Viacom18 across television, digital and consumer products business lines. The network had previously released 10 Motu Patlu movies in the ‘made for TV’ format that received an overwhelming response, and the 11thmovie marks the characters’ big screen debut. Post the theatrical release, the movie will also be aired on Nickelodeon and Viacom18’s digital platform, VOOT.

“An interesting confluence of 2 major developments has led to Motu Patlu’s silver screen debut. Firstly, the animation industry in India is rapidly evolving with a growth rate of ~13.8%, with over 15000 professionals working to create content for industries across the globe. Secondly, with an estimated 400mn kids in the country today, the kids category is the third largest in the Indian broadcast sector, after the GECs and Movies categories, with a sizeable headroom for growth in terms of both viewership and revenues.” Observed Sudhanshu Vats, Group CEO, Viacom18, before adding, “The 10 Motu Patlu ‘made-for-television’ movies have contributed ~10% of Nick’s ratings, being amongst the top 5 every time we released one such movie. The science behind the art of moviemaking, a core philosophy of Viacom18 Motion Pictures, demanded that the characters debuted on the silver screen. In that sense Motu Patlu has had an interesting journey – starting with television, then moving into digital, capitalizing on their growing brand value through Viacom18 Consumer Products and now starring in their own movie.”

Nina Elavia Jaipuria, Business Head, Kids Entertainment, Viacom18 added, “We have created a vibrant ecosystem around the Motu Patlu franchise that keeps growing in scale and reach by the day. From being the leading show across the kids category on television and digital; creating brand licensing opportunities across product categories, curating a great merchandising line, to now taking the franchise to the silver screen – our endearing Motu Patlu have further deepened and strengthened our bond with kids across the country.

Some of the leading names from the Indian film industry have been roped for the movie. The film is directed by Suhas Kadav and veteran lyricist Gulzar has penned lyrics of the title track. Vishal Bharadwaj has composed the music and Sukhwinder has lent his voice for the soundtrack.

Ajit Andhare, COO, Viacom18 Motion Pictures said, “Viacom18 Motion Pictures has stood for a distinctive kind of cinema and consistently delivered on that promise. Animation movies is an under-explored category in the Indian movie business and the success of the Motu Patlu ‘made for television’ movies clearly indicated that there was a demand for both the format and the characters to be introduced on a much larger scale. With our first foray into the the 3D stereoscopic animation segment, I hope the children across the country have special memories of Motu Patlu King of Kings, to take cherish.”

Talking about the film Ketan Mehta, Chairman & Managing Director, Maya Digital Studios, said “The launch of Motu Patlu King of Kings is a big step for the animation industry at large. Given that Motu Patlu is the most popular kids’ brand in the country today, we were inspired to create this magnum opus suitable for the big screen. This is a film that will be driven by children, but one that will be equally enjoyed by adults.”

A 360 degree marketing and activation plan has been crafted for the movie. Apart from being promoted on Viacom18’s network, the movie will also be promoted across other network groups. A promotion drive across 30 cities of the Hindi and Tamil speaking belts has also been planned for the movie. Marketing alliances with more than 20 brands across categories such as Confectionery, Toys, FMCG, Milk supplement products et al, is being tapped.

A story about a runaway circus lion, a lion king trying to protect his kingdom, a greedy poacher and Motu Patlu caught up in one final battle to save the life of the jungle; Motu Patlu King of Kings, releasing on October 14, 2016 is sure to capture the imagination of the children and adults across the nation.

ABOUT VIACOM18 MOTION PICTURES
Viacom18 Motion Pictures is India’s finest fully integrated motion pictures studio that has emerged as a force to reckon with by delivering a stream of critically and commercially successful films. Offering differentiated and meaningful cinema, some of its iconic releases have been Drishyam (2015), Gabbar is Back (2015), Margarita with a Straw (2015), Manjhi The Mountain Man (2015), Mary Kom (2014), Queen (2014), Bhaag Milkha Bhaag (2013), Madras Café (2013), Special 26 (2013) and Kahaani (2012) to name a few. Viacom18 Motion Pictures is also one of the few studios to have successfully ventured into regional films across languages like Bengali, Marathi, Punjabi and from the South. The Studio has also backed path-breaking and much-appreciated creative work in the form of hits like Bombay Talkies, Gangs of Wasseypur I and II, OMG – Oh My God!, Dharam Sankat Main, Manjunath, Shaitan, That Girl in Yellow Boots, Pyaar ka Punchnama and Pyaar Ka Punchnama 2, Inkaar, Saheb, Biwi Aur Gangster Returns, Rahasya and Boss amongst others.

ABOUT NICKELODEON
Nickelodeon, India’s leading kids’ entertainment brand and part of the Viacom18 Media Pvt. Ltd, is available in over 100 million households in the country. The Nickelodeon cluster in India boasts of a bouquet of differentiated channels that cater to kids from tots to teens – Nick, Sonic and Nickelodeon (with 2 programming blocks i.e. Nick Jr./ Teen Nick). Nick Jr. (www.nickjrindia.com), which is ‘the smart place to play” believes that ‘education’ and ‘entertainment’ go hand-in-hand and is aimed at young parents and pre-schoolers. Internationally acclaimed shows like Dora the Explorer, Bubble Guppies, Wonder Pets, Team Umizoomi and Go Diego Go foster motor, memory, maths and language development in a child. The Nickelodeon channel also caters to teenagers in the latter half of the day with the Teen Nick block which showcases international sitcoms such as ICarly, Victorious and Drake and Josh. The Nickelodeon cluster has an ecosystem that extends beyond television into Consumer Products, on-ground and digital platforms.