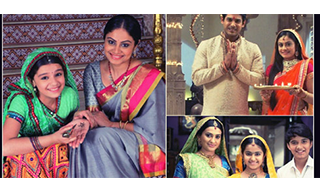 Mumbai, September 24, 2015: COLORS flagship show Balika Vadhu becomes India’s first drama series to cross the 2000 episodes mark. Over the years, Balika Vadhu became an embodiment of content true to societal customs and beliefs. From child marriage, domestic abuse, marital rape and even remarriage, Balika Vadhu consistently showcased the realities of rural India, became a harbinger for social change, took a stand towards women empowerment through its strong female protagonists and even encouraged girl child education.  Since its launch, Balika Vadhu struck a favourable chord with audiences and this landmark feat marks the reunion Anandi and her long lost daughter Nimboli who was caught in the web of child marriage.

Commenting on the new age dawning in Balika Vadhu, Raj Nayak, CEO – COLORS, said, “Over the years Balika Vadhu became a key identifier for our offerings and its success is synonymous with our success as an entertainment channel. This journey has been incredible and we would like to thank our viewers for their unending love and support and the team that strived hard to make this milestone a reality. ”

Adding further, Manisha Sharma, Programming Head – COLORS, says, “As Balika Vadhu progresses, so does the COLORS’ journey. Balika Vadhu pioneered the advent of social dramas on television and what stood out in this remarkable journey was the discerning content, endearing storyline and inspirational characters that made an indelible mark in the minds of the viewers. Going forward, the story will explore the emotions and the relationship of a mother and her estranged child as their paths coincide in a way desired by destiny.”

As the mother and daughter reunite, Balika Vadhu’s storyline will shift focus to Anandi and Nimboli’s budding relationship in the coming weeks. With Mangala Devi (Rajeshwari Sachdev) running away with Nimboli, it is now in Anandi’s hands to change her equation with her daughter and take her back home. But will Nimboli emotionally connect with her mother after so many years or will her bond with Mangala Devi hold her back.

Commenting on the mother-daughter reunion, Anandi aka Toral Rasputra said, “They say that the strongest bond in the world is that which is shared by a mother and her daughter. Over the past two years, I have had the good fortune to experience a multitude of emotions while living the life of Anandi on Balika Vadhu. Gracy is a delightful child to work with; our on-screen camaraderie is a direct translation of our off-screen relationship which is peppered with love, respect and fun. I would like to thank the viewers for their support because of which we have completed the 2000-episode milestone; we look forward to many such milestones in the future.”  Adding further, Nimboli aka Gracy Goswami added, “I may have been a part of Balika Vadhu for a few months, but the experience has been enriching. I feel lucky to be part of such a talented team. I feel honoured to be a part of television’s longest running show and hope to continue working with the team until the show draws to a close.”

Commenting on the milestone, Mr. Sunjoy Waddhwa, CMD – Sphere Origins, said “We are extremely happy to share that our show has completed 2000 episodes and is also the longest running Hindi daily fiction show on Indian television. We really thank the audience for their undoubted support since the inception of our show. The credit goes to the cast and crew for giving consistent stellar performances and for always being supportive. We look forward to continue setting standards in the industry for the same.”

To kick off celebrations, COLORS organized an all-India photography initiative on social media, and invited viewers to share some of their most precious moments commemorating the mother-child relationship while thanking them for their relentless love and support. As the mother-daughter reunite, a new chapter unfurls in the lives of Anandi and Nimboli on Balika Vadhu.

Tune in on Friday, September 25th to watch the anticipated reunion of televisions most loved characters at 8:00 pm only on COLORS!