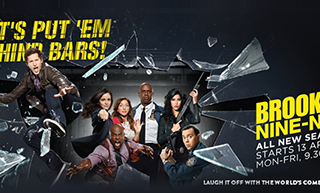 Mumbai, April 9, 2015: Taking forward the promise of unlimited laughter, Comedy Central, India’s leading 24-hour English Entertainment channel, brings to you nonstop laughter and madness. Gear up for a crazy summer as the channel announces the launch of new seasons of some beloved shows and a whole new show with About a Boy – Season 2, Brooklyn 99 – Season 2 and I Survived a Japanese Gameshow – Season 1 and 2. The new seasons are definitely going to give you a splash of high voltage drama filled with humour at its best. Keeping Comedy Central India’s ‘laugh it off’ spirit alive, the channel promises to up the laughter quotient during prime time, beginning this season.

Announcing the channel’s summer season line up, Ferzad Palia, Executive Vice President and Business Head, English Entertainment, Viacom18 said, “The success of Impractical Jokers has shown us India’s appetite for differentiated comedy content. Taking this proposition forward we are happy to entertain Indian audiences this summer with three new shows’ I Survived a Japanese Game Show’; which India will see for the first time, & also the new seasons of Brooklyn Nine Nine & About A Boy. Both these sitcoms are extremely popular in India & have been part of our highest rated shows of 2014”

About a Boy S2
About a Boy is a 2002 British-American comedy-drama film co-written and directed by brothers Chris Weitz and Paul Weitz. It is an adaptation of the 1998 novel of the same name by Nick Hornby. The film stars Hugh Grant, Nicholas Hoult, Toni Collette, and Rachel Weisz. The film at times uses double voice-over narration, when the audience hears both Will’s and Marcus’s thoughts.

I Survived a Japanese Game Show S1 and S2
I Survived a Japanese Game Show (originally titled Big in Japan) is an American reality show that inspired shows like Wipeout and Takeshi’s Castle. The show followed a group of Americans, who leave the United States for Japan where they competed in a Japanese style game show. The winner takes home US $250,000. The series won both the Best Reality prize and the overall prize at the 2009 Rose d’Or ceremony.

These shows will be supported by a 360 degree promotion plan which includes an extensive online leg, PR activations, on-ground events and so much more.

So tune in to Comedy Central, April 13th onwards to catch all new episodes and beat the heat with around-the-clock humour!