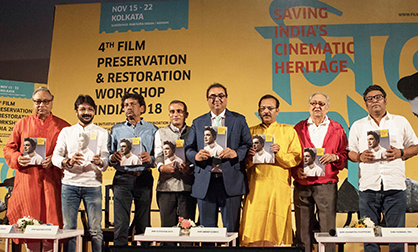 Kolkata, November 15, 2018: In line with the centenary celebration of the Bengali Film Industry, and with a purpose to encourage and give an impetus to film preservation and restoration, the 4th edition of Film Preservation & Restoration Workshop India (FPRWI) 2018 was today inaugurated at Kolkata’s Rabindra Sadan. Supported by Viacom18, this initiative of Film Heritage Foundation (FHF) and International Federation of Film Archives (FIAF) is being held in association with the Kolkata International Film Festival. The workshop will be held from 15th to 22nd, November 2018 at ICCR Kolkata.

Speaking at the occasion, Sudhanshu Vats, Group CEO and MD Designate, Viacom18, said, “At Viacom18 we believe in the power of synergies and the way our association has shaped up over the past three years is an apt example of harnessing the ability of the collective for the greater good. With collaboration of Government bodies, film fraternity, the international community of film restoration experts and cinema enthusiasts, we have been able to create an ecosystem that understands the importance of cinema as a cultural relic and is equipped to preserve and archive it, for future generations. With the past three editions of the workshop in Mumbai, Pune and Chennai, we are proud to now have created a pool of about 200 individuals who are aware and equipped to preserve films across India.”

The week-long intensive program will train a total of 58 students from Sri Lanka, Myanmar and India in preservation and restoration techniques for celluloid film and photographic material like posters, lobby cards, song booklets and photographs. FPRWI covers every aspect of film preservation making it one of the most comprehensive workshops for preservation and restoration across the world. Global experts like David Walsh – FIAF, Camille Blot-Wellens – FIAF, Kieron Webb – British Film Institute, Marianna de Sanctis  –  L’Immagine Ritrovata, Dawn Jaros – Academy of Motion Picture, Dana Hemmenway – Centre for Creative Photography, among others, are a part of the esteemed faculty. The 4th edition of the workshop introduces a new format allowing students to select a specialization of their interest. The program will also have practical sessions for scanning archival films with the latest and world class ARRISCAN XT scanner.

Shivendra Singh Dungarpur, Founder & Director, Film Heritage Foundation, further added, “Film preservation is a highly specialized field that requires trained archivists. The goal of these annual intensive workshops has been to create awareness about the urgent need to save our film heritage as well as to create a resource of trained archivists who can take this forward. After the success of the first three editions, we are thankful to the Government of West Bengal for their support towards bringing FPRWI to the Kolkata and we are encouraged by their decision to make the preservation of their film heritage a priority.”

On inaugurating the 4th Film Preservation & Restoration Workshop India 2018, legendary actor and Chairman of KIFF, Prosenjit Chatterjee said, “Saving and showcasing Bengali cinema is of utmost importance and we are glad that such concerted efforts are being made to ensure that our cinematic heritage is being preserved. I am grateful to Viacom18 and the Film Heritage Foundation for bringing the FPRWI workshop to Kolkata.”

At the opening ceremony of the workshop, Veteran actor Shri Soumitra Chatterjee said, “Bengali cinema has got international accolades to India and we are in dire of need of saving this heritage. Works of these legendary actors, directors, musicians and cinematographers need to be saved and hence, I am glad that we are today taking an initiative that will inspire the youth to preserve Bengali cinema.”