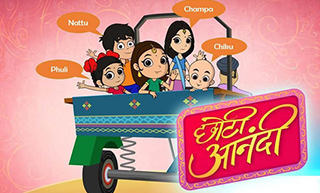 ~’Chhoti Anandi’ will simulcast on COLORS & Rishtey every Sunday at 10am, starting 17th January~

Mumbai, 4th January, 2016: Balika Vadhu has been one of the most successful and longest running shows of Indian Television and has crossed many milestones over the years. Anandi’s character has found a special place in everyone’s heart and has been one of the most loved characters till date. Drawing inspiration from Anandi’s appeal when she was a child, COLORS has associated with SphereOrigin to launch a home-grown animated series as a first-of-its-kind extension of a popular Hindi television character called ‘Chhoti Anandi’. Taking the first step towards building its Sunday morning programming, COLORS and Rishtey will simulcast ‘Chhoti Anandi’ starting January 17, 2016 every Sunday at 10am.

A first-of-its-kind, fun filled animated series will capture adventures of Anandi’s playful childhood. Chhoti Anandi is an 8 year old brave, righteous child and an apple of everyone’s eye. She is wise beyond her years and is known to find innovative and unique ways to solve problems of her village folks. The series will highlight her entertaining yet mischievous side as she explores innumerable escapades in the company of her friends in the by lanes of a village in Rajasthan.

Commenting on the launch, Raj Nayak, CEO – COLORS said, “Over the past 7 years, Anandi’s character has appealed to viewers across the globe. Taking note of her sustained popularity, we have decided to launch a homegrown animated series Chhoti Anandi. This is for the first time on Indian television that a popular fiction show character is being adapted into an animated series. Through ‘Chhoti Anandi’, we plan to engage and strengthen our bond with the tiny tot audience and present a show that is visually appealing and entertaining at the same time.”

Chhoti Anandi and her pack of friends aka Chhote Sipahi will be seen going on an adventurous joyride from Amazon Jungle, to the era of Dinosaurs, and also to the period when kings and queens reigned. The Chhote Sipahi comprising of Phuli, Nattu, Champa and Chiku, together amplify the fun quotient every time Chhoti Anandi meets with a new situation. As Chhoti Anandi’s right hand, Phuli is her closest friend. She is the naivest and most gullible of them all, yet charms everyone with her cuteness and innocence. Nattu is extremely competitive and aspires to be a leader. He opposes everything that Chhoti Anandi says and constantly tries to outdo her. Champa, the oldest member of the group, is a conformist and very practical by nature. And Chiku, the youngest member of the pack, is the most mischievous sipahi of them all. Along with journey that these 5 partake together, audiences will get to see a similar backdrop, colour and music as that of Balika Vadhu with an inspiring message for the viewers at the end of every episode.

Speaking about the concept of ‘Chhoti Anandi’, producer Sunjoy Waddhwa, CMD, Sphereorigins said, “It is a challenging prospect to translate a fictional character into an animated series like ‘Chhoti Anandi’ who is wise beyond her age and will question society’s regressive norms. The show will not be an animated representation of the story of Balika Vadhu, but Chhoti Anandi’s adventures. Chhoti Anandi’s tales will encourage young viewers to learn life lessons in the simplest manner and put them to practical use. This series will be a delight to watch for the kids’ audience and will cater to their entertainment need as this is the very first kind of animation show which will be shown on any GEC channel.”

The animation for the series Chhoti Anandi has been done by Anish Patel, founder and CEO of HopMotion animation studio.

As ‘Chhoti Anandi’ prepares to launch simultaneously on COLORS and Rishtey, the channel has planned an extensive marketing and digital promotional strategy to create maximum recall among audiences across age-groups.

Come and join Chhoti Anandi as she takes on the world with her Chhote Sipahi on Chhoti Anandi, starting 17th January 2016, every Sunday at 10:00 AM on COLORS and Rishtey!