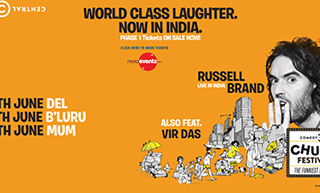 ~Russell Brand to headline the festival~

~Chuckle festival to be held on 26th/27th/28th June in Delhi, Bangalore, Mumbai respectively~

Mumbai, May 29, 2015: This monsoon season, Live Viacom18 will ensure that Indian audiences cackle, chortle and hoot with laughter as it brings to India the bright & funny and one of the finest names in international comedy, Russell Brand. Organized as part of the second season of the biggest international comedy festival ‘Comedy Central Chuckle Festival’ Brand who is also a renowned presenter, author and actor will entertain audiences with his famous one-liners and side-splitting stories. While this will be Brand’s first performance in India scheduled to be held across Mumbai, Delhi and Bangalore on June 26th, 27th and 28th respectively (kindly confirm the exact dates) this will be his third visit to India.

Best known for his satire, whimsy and observational humour along with his comical acts in movies such as Forgetting Sarah Marshall, Get Him to the Greek, the voice of Dr. Nefario in Despicable Me 1 & 2. A livewire comedian, he has brought the house down in most of his performances with his unique brand of humour. Far from being a traditional stand-up comic, Brand’s audiences engage not only with the lines he delivers on stage but also with the quirky persona he has created. All in all, these three nights are expected to be filled with fun, excitement and rip roaring laughter.

Confirming the News Jaideep Singh, Sr. Vice President, Integrated Network Solution said, “Live Viacom18 is in the business of bringing alive unique experiences in all genres of entertainment. We today have IP’s in all genres with the focus on experience and cutting edge programming. We believe in the power of comedy and our first edition of the ‘Comedy Central Chuckle Festival’ met with stupendous success. Having partnerships with artists around the globe has continually ensured that Live Viacom 18 continues to present vibrant world-class performances to a huge range of audiences in India. We can now deliver a landmark event to local audiences’ top- lining some of the most brilliant comedic artists working today. This time around who better than Russell Brand – a true heavyweight from the world of comedy to lead the show”

Live Viacom18′ Chuckle Festival made a big bang entry into the Indian comedy scene in 2013 and has been a destination venue for world-class comedy since then presenting some of the best international comedy talent that the world has to offer. The festival reflects its growing profile in presenting the world’s best comedians to Indian audiences and recent performances include renowned names – from Gabriel ‘Fluffy’ Iglesias to Eddie Ifft, Paul Varghese and now Russell Brand.