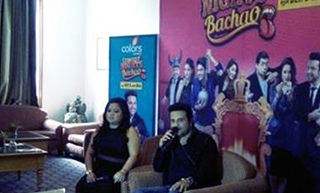 The people of Lucknow were elated to have Bharti and Krushna in their city.

The press conference started with Bharti and Krushna doing a brief comedy act to introduce the significance of the ‘chair’, the theme and concept of Comedy Nights Bachao. The media was in splits post their performance, everyone seemed to like the concept of the show. Bharti and Krushna spoke about the all celebrities on the show and queued in the AV to show the Lucknow media a glimpse of the first episode.

After the press conference, Krushna and Bharti proceeded for one-on-one and group interactions with news channels and print media. A photo op was conducted by the poolside.

After the press conference, Bharti and Krushna headed to the Hindustan office for an editorial meet. They met the entire team including the editor and spoke at length about the unique offering of the show and gave the entire office a feel of the concept.

The last activity of the day was the marketing event. The venue was packed with excited fans rooting for Krushna and Bharti.

Please find below the exposure received in Lucknow