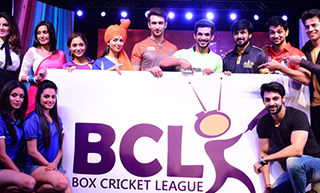 Mumbai, December 16, 2015: You have seen your beloved television stars shake a leg on the dance floor, you’ve seen them perform death defying stunts and you’ve seen them entertain you daily in your favorite TV shows… But now, get ready for more drama and entertainment in another field all together! COLORS, along with Balaji Telefilms Limited and Marinating Films brings together two of the finest sources of entertainment in India – cricket and television, in a power packed season of Box Cricket League (BCL). With a stellar line up of over 200 top celebrities, Box Cricket League will be telecast on COLORS and COLORS HD from 28th February 2016, every Sunday at 4.30pm with a repeat telecast on Rishtey.

Changing the meaning of run-through and strike-off for the actors, the curtains will rise for an exceptional game of glamorous cricket. This star-studded cricket league will have 10 teams named after 10 cities namely Ahmedabad Express, Kolkata Babu Moshayes, Chandigarh Cubs, Delhi Dragons, Jaipur Raj Joshiley, Chennai Swaggers, Mumbai Tigers, Pune Anmol Ratan, Rowdy Bangalore and Lucknow Nawabs led by celebrities like Sunny Leone, Nandish Sandhu, Ajay Chaudhry, Mrunal Jain, Anita Hassandani, Kamya Punjabi and many more. The high point of the game is undoubtedly the mix of men and women in every team. The inclusion of males and females, across all teams, makes it a battle of equals where the celebrities will be fully charged to kick the dust up!

Speaking about the association, Raj Nayak, CEO – COLORS, said, “COLORS is always known for its out-of-the- box thinking, but this time we’ve literally got a fabulous game within a box. Box cricket league adds to the enthusiasm as it brings together the biggest faces across channels uniting the TV fraternity over a unique game of cricket. With BCL, we aim to give cricket an exceptional spin and make it likeable to each and every member of the family. We are happy to associate with Balaji Telefilms Limited and Marinating Films as the broadcasting partner for this venture giving our viewers robust content and wholesome entertainment.”

Commenting on the concept, Ekta Kapoor – Joint Managing Director, Balaji Telefilms Limited, said, “BCL is a grand extravaganza where television’s biggest stars come together to play the most popular sport in the country.  But of course, it’s cricket with a twist! BCL is a reality show that has all the ingredients of a television drama – be it loving, loathing, bonding or sledging the twists and turns are as real as it gets! With Box Cricket League, we present to our viewers an array of their favorite ‘Bahus’ playing alongside their male counterparts, on the field. 10 teams, 200 actors, 1winner…let the games begin!”

With a huge number of television stars vying to play this season of BCL, the league owners have had to set new guidelines for player qualifications. The strict dictate ensures only top lead actors (who’ve starred as main leads for a minimum of 250 episodes) and second lead actors (who’ve had at least 500 episodes to their credit) partake in this season. Besides popular fiction faces, GEC Reality show winners and top contestants are also qualified to play. The new player mandates have therefore caused a lot of heartburn for those actors who were hoping to get on the field.

About Box Cricket League
This is an on-ground property in which famous TV and Bollywood stars will perform on the cricket field to battle ‘off-sides’ and ‘run-outs’. The championship will be played under two groups A and B wherein each group will include 5 teams competing with each other.  While some teams will have female celebrities as the captains, others will be led by male captains. Taking the entertainment quotient a notch higher will be a line-up of high energy performances by your favorite celebrities. Along with the on-ground drama, the viewers will also get some scoop straight from the locker room, strategy sessions and dugouts. Move over 4’s and 6’s as Box Cricket League will give an opportunity to score 7’s and 8’s making it more interesting than ever.

BCL will provide its fans an opportunity to watch the game live in flesh and sweat! Game on and watch your favorite starts dabble on the cricket field starting February 28th, 2016 every Sunday at 4.30 pm on COLORS & COLORS HD, with a repeat telecast on Rishtey.