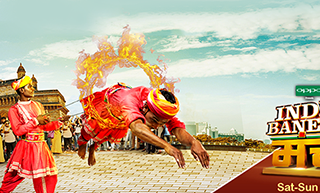 Mumbai, 4th May 2017:  No judges. No votes. The street is the stage and all you need to do is win the crowd. After tasting success with Rising Star, COLORS is ready to take LIVE audience engagement to newer heights with OPPO Camera phone presents India Banega Manch – the Indian version of the successful Israeli format, Win the Crowd. Moving away from the confines of a studio and celebrity judges, India Banega Manch, hosted by Krushna Abhishek and Mona Singh,will empower LIVE on-ground audience to select hunarbaazs who possess the capability to stun the crowd within 5 minutes of their performance. Shot at iconic locations like Red Fort and Delhi Haat in New Delhi, Juhu Beach and Kala Ghoda in Mumbai, and New Market and Princep Ghat in Kolkata to name a few, India Banega Manch will make the streets every hunarbaaz’s playground. Their score, calculated basis the number of people whose attention they’re able to grab through their performance, will earn every location’s top performer a spot on the Jeet Ki Seat. India Banega Manch, produced by BBC Worldwide Entertainment, will bring power-packed talent and performances to television screens starting 7th May 2017, every Saturday and Sunday at 9:00 PM on COLORS.

Commenting on the show, Raj Nayak, COO – Viacom18 said, “Following the success of Rising Star, we are taking our belief in the audiences’ ability to choose extraordinary talent to the next level with India Banega Manch. We are proud to bring to our viewers another pathbreaking show which has been shot LIVE on the streets, sans any stage, judges or votes. Keshet International is the format owner of this concept which we thought was apt for a market like India which has exceptional talent hidden in every nook and cranny.” Adding further, he said “We are pleased to join hands with our strategic partner, OPPO Camera phone who are on-board as the Presenting Sponsor. Our continued association highlights the branding synergies that we are able to draw jointly leveraging our respective business objectives and goals.”

Elaborating on the format, Manisha Sharma, Programming Head – COLORS said, “India Banega Manch is a show that viewers have never experienced before. The sets for the show are the arenas of iconic and historical locations like Red Fort, India Gate and Connaught Place in Delhi, New Market and Princep Ghat in Kolkata. The talent has to ensure that they attract the busy people around them with their performances, and force them to stand and watch despite the summer heat; audiences have stepped out in large numbers. Given the scales that viewers are used to, it was very challenging yet exciting for our teams to shoot with hidden cameras. Talent was also a little taken aback to perform in these locations. Even our anchors, Krushna Abhishek and Mona Singh, will be in an avatar unlike ever before. We’re certain that it’s this uniqueness which will make India Banega Manch a truly first-of-its-kind proposition.”

Commenting on the scale of India Banega Manch, Myleeta Aga, SVP & GM South East Asia and South Asia at BBC Worldwide said, “We are glad to be working once again with the team at COLORS to bring this uniquely democratic series to Indian audiences. Contestants will get to showcase their talent and be judged by the crowd they attract. We hope to continue to bring many more novel concepts and formats that truly represent India to our audiences.”

Supporting the talent through their sojourn on India Banega Manch will be ace television hosts – Krushna Abhishek and Mona Singh – who will watch the hunarbaaz’s performance from a mobile control room while hidden cameras capture the audiences’ candid reactions. As hosts, Krushna and Mona will not only soothe the hunarbaaz’s nerves, but also provide much respite with their witty comments.

Commenting on the show, host Krushna Abhishek said, “The format of the show defies traditions while welcoming a new wave of talent which connects with the masses and wins their hearts.” Adding further, host Mona Singh said, “While I have hosted TV shows in the past, nothing comes close to the thrill and excitement connected to India Banega Manch. There is a different kind of energy that percolates the environment when the talent is performing LIVE in front of audiences. We’ve shot in multiple locations so far, and the response from the viewers has been spectacular.”

OPPO Camera phone presents India Banega Manch will see a robust high decibel 360-degree marketing campaign, PAN India, that will effectively leverage all mediums like outdoor, on-air, radio and digital to garner top-of-mind recall amongst viewers. On the digital front, the channel has designed a holistic campaign striving to drive conversations across several social media platform. Activities lined up during the launch phase include a blogger outreach program, and a video contest named ‘Talent Ka Manch’ urging the LIVE audience to share videos of the talent that they have witnessed. The format of the show will further be highlighted through various creatives, pictures and gifs which speak of key aspects including ‘No judges, no hosts, no sets – only talent!’ Additionally, a unique initiative called ‘Manch Ke Ustaad’ will allow the audience to get a deeper glimpse into the lives of the hunarbaaz to facilitate relatability. In terms of brand partnerships, COLORS has roped in OPPO Camera phone as the Presenting Sponsor for India Banega Manch.

With hunar taking precedence over the stage, celebrity judges, glitz and glamour, India Banega Manch will uncover the rarest jewels whose talent will make India proud.

Watch in awe as the hunarbaaz make talent the true king of entertainment as Oppo Camera phone presents India Banega Manch premieres on 7th May 2017,
Every Saturday and Sunday at 9:00 PM on COLORS

About VIACOM18:
Viacom 18 Media Pvt. Ltd. is one of India’s fastest growing entertainment networks and a house of iconic brands that offers multi-platform, multi-generational and multicultural brand experiences. A joint venture of Viacom Inc. and the Network18 Group, Viacom18 defines entertainment in India by touching people on-air, online, on ground, in shop and through its cinema.