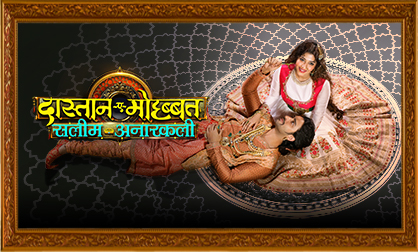 Presented by Dabur Red Paste and powered by MDH Deggi Mirch, Dastaan-E-Mohabbat: Salim Anarkali premieres on October 1st and will air every Monday to Friday at 8.30pm

Mumbai, 26th September 2018: A love that shook the very foundation of the Mughal empire, a timeless romance of a young crown prince and a beautiful courtesan – COLORS gears up to revive the greatest love story there ever has been: DASTAAN -E-MOHABBAT | SALIM ANARKALI.

Presented by Dabur Red Paste and powered by MDH Deggi Mirch, Dastaan-E-Mohabbat: Salim Anarkali tells the tale of charming Mughal prince Salim (Shaheer Sheikh) and the mesmerizing rakassa Anarkali (played by Sonarika Bhadoria) who challenged the norm and chose to fight for their love. This magnum opus boasts of an ensemble cast with veteran actor Shahbaz Khan essaying the role of Akhbar, Gurdeep Kohli Punjj plays Jodha and Aruna Irani as Hamida Begum.  Much loved television faces like Piyush Sahdev, Tasneem Sheikh and Parvati Sehgal will also be part of this rebellious love drama. Produced by Writers’ Galaxy, the show will premiere on 1st October 2018 and air very Monday to Friday at 8:30 pm on COLORS.

Speaking about this development, Manisha Sharma, Chief Content Officer, Hindi Mass Entertainment said, “Set against the historical backdrop, the show recounts the epic love story of prince Salim who is in love with a kaneez, Anarkali. The society’s disdain for this forbidden love coupled with his father Akbar’s animosity makes Salim not only a rebel but also ready to relinquish the throne – thereby making this tragic tale a compelling story. We have roped in some fine actors like Shaheer Shaik, Sonarika Bhadoria, Gurdeep Kohli Punjj and Aruna Irani amongst others to play these larger than life characters. This unique narrative on COLORS is sure to grip the viewers as it is a portrayal of an era that we have grown up both watching and reading about. It’s time to retell this evergreen love saga for this generation.”

Mr. Anirudh Pathak, Producer and Creator of Dastaan-e- Mohabbat: Salim Anarkali, Writers Galaxy, further added saying, “The show brings in the dynamism of the Mughal Era and will depict the courtship of Salim and Anarkali. With advanced technology and great creativity, we are looking forward to give our audience a brilliant cinematic experience. Keeping in mind the grandeur of the show – we have the best team on board to help reflect this version of history that has greatly been written about.”

Shaheer Sheikh who plays Salim said, “Salim is a dream role for any actor. I think the most difficult part will be to portray the layers and the pain of the character. He is an extremely complex person so itwont be that simple’ however –  that’s what I like about this role. The makers have got the look and the sets right and hopefully we can all do justice to the characters. Being a TV actor, our options are very limited and I feel very lucky to get this opportunity to play the iconic character of Salim.”

Sonarika Bhadoria who plays Anarkali, said, “The show will be a rendition of the immortal saga of Prince Salim and courtesan Anarkali. It will convey the message of love which takes precedence over rules and societal norms. There is a lot of mystique when it comes to depicting a strong character like Anarkali. I’ve been taking Kathak lessons to get the nuances of the character.”

The eternal profession of love and passion between Salim and Anarkali has been immortalized in history and is now being brought to life with a tightly woven narrative.

Watch this epic saga starting October 1st, every Monday to Friday at 8.30pm only on COLORS

The grand set spreads over 1 acre of land and boasts of a lavish darbar, an plush royal bedroom and an artistic harem to depict different scenes of the show.

All the costumes have been carefully crafted under designer Nidhi Yasha’s guidance that best highlights the culture of this period drama.

With more than 200 people as part of the crew, DASTAAN -E-MOHABBAT | SALIM ANARKALI, is sure to reflect the true majestic beauty of the Mughal empire and showcase an affair that will always be spoken about as the greatest love story ever!

About Viacom18 Media Pvt. Ltd.
Viacom18 Media Pvt. Ltd. is one of India’s fastest growing entertainment networks and a house of iconic brands that offers multi-platform, multi-generational and multicultural brand experiences. A joint venture of TV18, which owns 51%, and Viacom Inc., with a 49% stake, Viacom18 defines entertainment in India by touching the lives of people through its properties on air, online, on ground, in shop and through cinema.