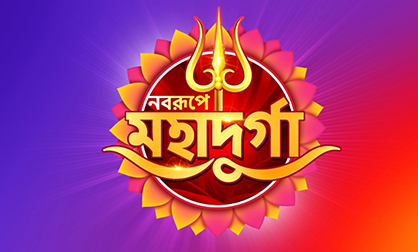 Kolkata, 23rd September- Come autumn and everybody seems to get into the festive mode, which starts pretty much from Mahalaya. Mahalaya, which marks the beginning of Devi-Paksha and the end of the Pitri-Paksha is an auspicious day for Bengalis, who celebrate it with much enthusiasm. On the auspicious day of Mahalaya, through a mythological tale, the origin of the 9 forms of the divine Goddess will be shown through NABARUPE MAHADURGA only on COLORS Bangla. The show presenting the nine forms of Durga will go on air on 6th October at 5 am.

Nabarupe Mahadurga promises to celebrate the 9 avatars of Maa Durga. Each of the nine manifested forms are separately venerated during the festival. The show will be about the timeless story of Ma Durga – how she comes into being and saves the Gods and mankind from the evil of Mahisasur. Woven in the story, will be introduced the 9 different forms of the goddess-  Shailaputri, Brahmacharini, Chandraghanta, Kushmanda, Skandamata, Katyayani, Kaalratri, Mahagauri, and Siddhidatri. The entire show will be heavily based on dance and music which has never been seen before on Bengali television.

Popular actress Koel Mullick will essay the role of Maa Durga and will be sporting Mahisasur Mardini look and Parvati look. The show will have an ensemble cast showcasing some of COLORS Bangla’s most popular artists portraying Devi’s many forms like Adrija Roy, Tumpa Ghosh, Titiksha Das and Pallabi Roy. Alongwith them popular actresses like Jasmine Roy, Ushoshi Roy, Devlina Kumar and Saoli Chattopadhyay will be seen in different avatars of Durga. Samrat Mukherjee will be seen portraying the role of Mahisashur. Popular actor Gaurab Chatterjee as an anchor will narrate the nine forms of Durga.

The show has been directed by none other than the renowned director Anirban Mullick. The music for the program has been arranged by exemplary music director Debajyoti Mishra. Speaking on the occasion Sagnik Ghosh, Business Head, COLORS Bangla said, “Mahalaya is not just an important day but an emotion as it ends the year-long wait for Durga Puja, the most important festival celebrated by Bengalis. It describes the journey of Maa Durga and her triumph over evil. Keeping this in mind the show will be about the timeless story of Ma Durga – how she comes into being and saves the Gods and mankind from the evil of Mahisasur. As the name suggests Nabarupe Mahadurga, we will introduce the 9 different forms of the goddess. We have roped in popular actress Koel Mullick to play the role of Durga and we are extremely excited to bring to our viewers this powerful act.”

The channel has recently rolled out a fresh new look along with the introduction of a slate of new original programmes. On the communication approach the channel will be cross promoting on other channels. On the digital front interesting trivia about the nine forms of Durga, facts decoding Maa Durga’s weapons will be shared.

So, watch this star-studded dance drama act on the special occasion of Mahalaya on 6th October at 5 am only on COLORS Bangla!!