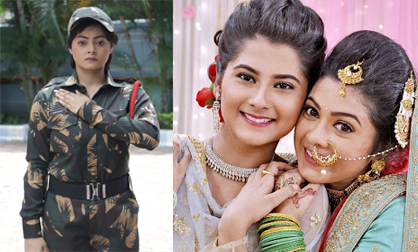 National, August 28, 2018: Dedicated to its promise of showcasing non-stop quality entertainment, COLORS Bangla will endow viewers with two captivating shows – Jahaanara and Mukhosher Arale, premiering on September 3rd. The new fiction shows will add hues of drama, action and romance to primetime programming on Bangla television, with Jahaanara airing at 9pm and Mukhosher Arale airing at 9:30pm, from Monday to Friday only on COLORS Bangla.

Commenting on the launch of the shows, Rahul Chakravarti, Business Head – COLORS Bangla & Odia said, “COLORS Bangla takes pride in showcasing a variety of content that appeals to both the masses as well as niche audiences looking for specific genre of shows. We are closely appraising the response of viewers to our content and are trying to satiate their requests with unique programming propositions. With Jahaanara we are focusing on a topic that’s untouched in Bengali television space while a show like Mukhosher Arale accentuates the pride of patriotism with a flavor of family and romantic drama. Our philosophy from the onset has been to bring only the best-in-class, and with the new shows COLORS Bangla promises viewers edge-of-the-seat entertainment.”

JAHAANARA – Monday to Friday at 9pm

Set in a backdrop of a conventional Muslim community and society, Jahaanara tells the tale of two sisters Jahaanara and Rubina, with strikingly opposite personalities and outlook to life, as they take on the traditional custom of ‘Triple Talaaq’. Shweta Mishra makes her debut as the protagonist ‘Jahaanara’, with acclaimed actor Payal Dey, taking the mantle of her elder sister ‘Rubina’ in the show. After a series of devious plotting and unfortunate twists & turns, both sisters are eventually married to the same man, who feints behind religious customs and traditions. Currently mired in controversy, the topic of ‘Triple Talaaq’ is accosted in the upcoming Muslim drama. Playing pivotal roles, popular actors Sraboni Banik, Sumit Samaddar, Ananda Ghosh & Kushal Chakraborty complete the ensemble cast of the show.

Mukhosher Arale magnifies the feeling of patriotism and the undying love for one’s country. Playing the role of the protagonist – ‘Jhinuk’, Sarmishtha Acharjya goes up against the enemies of the country and uncovers the conspiracies to create national unrest. But the life of a patriot faces many more trials and tribulations, as Jhinuk is torn away from the love of her life ‘Arko’ played by Arko Paul Chowdhury and thrown into the chaos of trying to safeguard the country. Supporting the strong cast of the show, Bratya Basu, Rajib Chatterjee, and Biswajit Chakroborty play crucial roles in this compelling action-romantic drama.

After an epic premiere season of Ke Hobe Bangla r Kotipoti, that gave audience a once in a lifetime opportunity to transform dreams into reality and brought forth several life-changing stories, COLORS Bangla will keep viewers engrossed by the enthralling performances and gripping storyline of the new shows.

Guaranteeing weekdays filled with entertainment and fueled by action, drama, romance and much more, starting September 3, Jahaanara airs at 9pm and Mukhosher Arale airs at 9:30pm every Monday to Friday only on COLORS Bangla

A family entertainment channel that brought about a revolution in Bangla Television, COLORS Bangla (Erstwhile ETV Bangla) matches the distinctiveness of the rich Bangla culture with qualitative and contemporary programming.  The channel mirrors the cultural ethos and the progressive values of the Bengalis’ through innovative and relevant content. Some of our flagship shows have been programmes like Resham Jhanpi, Mahaprabhu Sree Chaitanya, E Amar Gurudakshina, Bindass Dance, Abbulish, Byomkesh, Shonge Srijit, Benebou, amongst others.