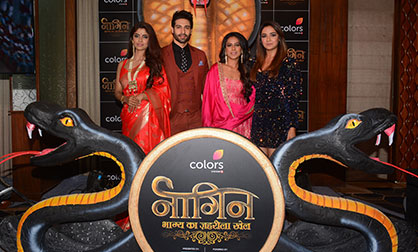 ~Presented by Odonil Zipper and powered by Boroplus Doodh kesar body lotion, Naagin-Bhagya ka zehreela khel, will premiere on 14th December 2019 and will air every Saturday & Sunday at 8 pm only on COLORS ~

Mumbai, 9th December,2019: The much awaited Naagin is back! She is back to seek vengeance, to deceive you with her beauty, to either love you or fight you for what she’s lost. Owing to its massive popularity and consecutive successful seasons, COLORS biggest fiction franchise ‘Naagin’ is here with another captivating season titled Naagin-Bhagya ka zehreela khel. This season’s story revolves around Brinda and Nayantara whose lives are intertwined due to their scarred past and that has a bearing on their future. This highly mythical offering will witness a new ensemble star cast of entertainment’s most popular faces like Nia Sharma, Jasmine Bhasin, Vijayendra Kumeria, Sayantani Ghosh among others. Produced by Balaji Telefilms, Presented by Odonil Zipper and powered by Boroplus Doodh kesar body lotion, Naagin Bhagya ka zehreela khel will premiere on Saturday, 14th December 2019 and will air every weekend at 8:00pm only on COLORS.

The fictional fantasy is based on Indian folklore which entails family drama, revenge, romance, and suspense with inconceivable twists. Love is the strongest emotion and it has a significant place in a Naagin’s life. An imperative part of our folklore has been the belief that if Naagin’s love is snatched away from her, she neither forgives nor forgets and surely returns with a vengeance. Synergising mythological ancient beliefs and the modern-day fantasy series, Naagin– Bhagya ka zehreela khel will enchant viewers with a mysterious story that revolves around two women Brinda and Nayantara, their past which deeply affects their future and fate that brings them on crossroads. While, Nayantara is filled with rage and waiting to seek revenge from everyone who hurt her parents, Brinda is a simple, genuine and kind girl who loves her family. As the story progresses, the audiences will ponder as to how a heartbroken Nayantara, daughter of a Naagin filled with rage, will seek her mother’s revenge. Will she spare anyone who comes her way? Will she be able to seek her revenge and how will Brinda become a part of her vendetta?

Speaking about the launch Nina Elavia Jaipuria, Head, Hindi Mass Entertainment and Kids TV network Viacom18, said, “At COLORS, we are extremely delighted to have a franchise that has been consistent in all forms be it the popularity, captivating storyline or endearing characters. We have a gamut of shows across genres especially on weekends that have had a series of successful seasons and have connected so strongly with the audience. As far as Naagin is concerned, it is undoubtedly the most successful fantasy fiction property on television. Slotted at 8:00 pm, the show will be back to enthrall viewers and strengthen our weekend prime time viewing. A success story, this season too promises to be edgy and action-packed.  Further she added, “We are extremely happy to partner with Odonil Zipper and Boroplus Doodh kesar body lotion as our sponsors for this season.”

Commenting on the concept of the show, Manisha Sharma, Chief Content Officer, Hindi Mass Entertainment, Viacom18 said, “It’s always a proud moment to bring back a refreshing season of one of the most watched supernatural shows in India. For the upcoming season of Naagin, we have worked on some key aspect likes tweaking its pace, storytelling, casting and the graphics, making it more engaging than ever. Indian viewers continue to enjoy folklore as a genre, and with Naagin we present an unsettling story fueled with thrill. It will be interesting to watch how Nayantara is filled with rage and waiting to spew venom on everyone who hurt her parents while Brinda who is innocent and unaware is tagged along Nayantara’s venomous journey.”

Elaborating further, Producer Ekta Kapoor of Balaji Telefilms said, “Over the years, COLORS and Balaji have successfully created a strong line-up of fiction shows, Naagin being the most popular one. The show has become a brand in itself and we hope to continue receiving the same kind of love and support from our viewers. The season presents a compelling journey of Brinda and Nayantara and how their paths cross. Adding to the experience, the storyline will be backed by never seen before visual effects and graphics to allure the audience. I am delighted to have Nia Sharma (Brinda), Jasmin Bhasin (Nayantara) and Vijayendra Kumeria playing a pivotal role in the show.”

Nia Sharma essaying the character of Brinda commented: “For the first time I am trying my hands in fantasy fiction that has become a very strong brand. Naagin demands commitment, versatility and I am so grateful to COLORS and Ekta Ma’am for trusting in me. I am playing the role of Brinda, simple and soft spoken in nature who avoids fights even when people are harsh towards her. She loves the family she works and is very submissive towards them.”

Jasmin Bhasin portraying the character of Nayantara said, “Ichachadari Naagin is a proven concept and the show has received a lot of love since its inception. I essay the role of Nayantara, who is bold yet broken and wants to avenge her father’s death. She is fearless and extremely ambitious when it comes to attaining her goal. With revenge on her mind she believes in her fight and can go to any extent for retribution.”

Vijayendra Kumeria essaying the character of Dev Prakash commented, “This genre is a completely new territory for me, and I am more than excited to be a part of the Naagin legacy. My character of Dev Prakash has an extravagant lifestyle but hates to show-off and respects people around him unlike his affluent cousins. An absolute gentleman, caring and loving he is absolutely against superstitions and doesn’t believe in its power either. Many twists will unfold as the story progresses and I’m thrilled to be part of a show that is already loved.”

With the pitch-perfect cast of Jasmin Bhasin, Nia Sharma, Vijayendra Kumeria and Sayantani Ghosh in the lead roles, the show also has Shaleen Bhanot, Supriya Shukla, Geetanjali Tikekar and Rakhi Vijan who will be seen playing key roles. Presented by Odonil Zipper and powered by Boroplus Doodh kesar body lotion, Naagin-Bhagya ka zehreela khel, promises to give viewers the best visual experience with a gripping storyline.

Inspired by the famous memory game, COLORS has introduced, ‘Bhagya ka khel’, where images of all actors across seasons will be used. Users are supposed to open one card and match the same with actors who have been a part of the same season. This should be done in a stipulated time frame. On matching the cards, either BTS videos or bytes of the cast will be played for the users. The game will be hosted on https://www.colorstv.com/in/ and can be played more than once.

Slither into Naagin’s mystical world, starting 14th December, every Saturday and Sunday to 8:00 pm only on COLORS TV