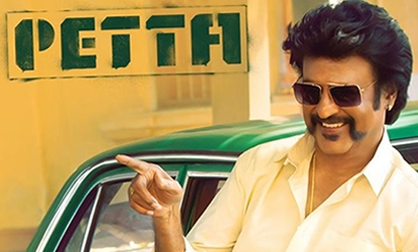 Speaking about the acquisition, Rohan Lavsi, Business Head, COLORS Cineplex said “Superstar Rajnikanth’s appeal is a national phenomenon and as we look to scale our movie library for our viewers, we believe his latest blockbuster will be a natural fit in our bouquet. Petta has gone on to become one of the biggest hits in the Indian film industry this year and we are confident that it will recreate that magic on Colors Cineplex when we air its World Television Premiere.”

An emotional potboiler Petta traces the story of hostel warden Kaali (Rajnikanth) who, in a bid to save Anwar, his best friend’s son, stands up against the local goons. However, everything goes haywire when he is forced to face his past. Nawazuddin Siddiqui plays the role of the baddie, Singaar Singh, while Vijay Sethupathi plays Singaar’s son Jithu.

Colors Cineplex has planned a 360-degree marketing campaign ahead of the premiere. On television, the promos are being played on 25+ channels across genres. A digital campaign has also been planned followed by promos showcase across 2200+ cinema theatres – multiplexes and single screens in key Hindi speaking markets with the release of Student of the Year 2.

About Colors Cineplex
’COLORS CINEPLEX’, a premium Indian movie destination for great cinematic experiences, is the first-of-its-kind film channel launched by leading media conglomerate Viacom18 Media Pvt. Ltd. Launched in May 2016, the channel provides its viewers with the ultimate movie-watching experience while delivering Viacom18’s promise of showcasing enriching, engaging and entertaining content to the viewers. Through its tagline of Filmein MUST Hain, ’COLORS CINEPLEX’ features multi-genre films including the latest blockbuster hits from Viacom18’s wide library of choicest films.