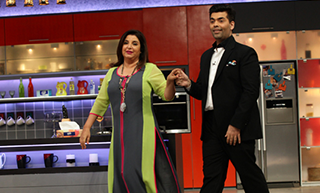 ~ It’s all about loving Films, Food and Friends for Karan Johar and Farah Khan! ~

Whenever Karan Johar and Farah Khan come together, one thing that is guaranteed are fireworks! And this time, the fireworks will be in Farah Khan’s kitchen as Karan Johar comes visiting on Videocon presents Farah Ki Daawat on COLORS. As the duo came together to share their common love for the F’s in their lives – Films, Food and Friends, Karan Johar and Farah Khan doubled the dose of entertainment with their camaraderie. Making their reunion sweet and sinful on the show Farah and Karan indulged into some desert treats. We will see Karan sharing one of his favourite recipes ‘Chocolate Walnut Fab Fudge’ with Farah and viewers.

Further in the episode Karan Johar also revealed stories of his foodie escapades unknown to many, he had started a secret ‘Food Fund’ for himself wherein he would use the money earmarked for his computer class fees to purchase chocolate cakes instead. And the most amusing part of it all was that he would lock himself inside the bathroom until he finished gobbling down the cakes!

Speaking about the episode Farah Khan says, “Karan is a dear friend and having him on the show was a lot of fun. Both of us share a common love for all things related to films, friends and food. Karan actually told me a lot of things about his love for food that I had never heard before and it was a treat to cook the Chocolate Walnut Fudge with him! We also had Karanveer Bohra, Karan Grover and Karan Tacker who joined us…that was just a way to have too many Karans in one room and a whole lot of fun.”

And if you think this bit of information is exciting, a lot more will be revealed during Karan Johar’s episode. As the entertainment siesta continues, Farah Ki Daawat will feature many more celebrities including Anushka Sharma, Arjun Kapoor, Shilpa Shetty Kundra and Kapil Sharma among others.