Media
From Tea to Sindhi Curry: Sonakshi Gets Her First Cooking Lesson on Farah Ki Daawat! 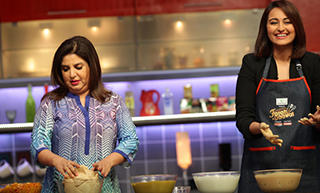 From Tea to Sindhi Curry: Sonakshi Gets Her First Cooking Lesson on Farah Ki Daawat!

Food fiesta and merriment are guaranteed on every episode of ‘Farah Ki Daawat’. While celebrities’ homegrown recipes take the forefront every week, every episode also promises incredible insights from celebrities from different walks of life about their food habits, cooking skills and much more. This week’s episode of Farah Ki Daawat will take viewers on a whirlwind ride into the kitchen of the Sinha household as Sonakshi Sinha and her mother, Poonam Sinha showcase what makes their food the yummiest in the film industry. Cooking up a storm in the kitchen, Sonakshi’s mother shares the recipe of her signature Sindhi Curry and Aloo Tuk which has the entire industry literally eating out of her hands!

A foodie who has battled weighty issues since before she entered films, Sonakshi Sinha reveals the real reason behind her weight – the scrumptious food that her mother cooks which is extremely popular. However, her mother Poonam Sinha reveals a nugget of information that will leave everyone shocked. The food-loving Sonakshi has never entered the kitchen! But not one to be overshadowed by this startling revelation, Sonakshi helped her mother to prepare the food in great spirits. In fact, Sonakshi even revealed that she unlike her peers who can at least prepare tea without hesitations, she is unaware about the same leaving Farah and the audience completely befuddled.

Commenting on her cooking escapade, Sonakshi said, ”I never thought being in the kitchen could be so much fun and if the kitchen is as fancy as Farah ki Daawat’s kitchen it’s even better, I had my favorite chef,  my mother guiding me all throughout and with Farah around it was very entertaining. We laughed; we chatted and cooked a great meal together. My Mother was the most thrilled because finally her wish of getting me to cook something has been fulfilled”

But there is a first time for everything and Farah coaxes Sonakshi to learn the nitty-gritty of cooking, especially since her mother is Bollywood’s favourite chef. Seizing the opportunity with both hands, Poonam Sinha took the opportunity to teach Sonakshi the know-how of cooking on Farah Ki Daawat for the world to behold! And as the dish wows everyone present, Sonakshi grumpily comments that her mother will now surely persuade her to learn the A to Z of cooking so that she is well-equipped to be the perfect bahu!

The surprised yet proud mother of Sonakshi, Punam commented, “I’m thrilled her Cooking inauguration or like they say “shree Ganesh” happened in my presence and I got to witness it. I was amazed to see how fast she was grasping things in the kitchen. It was a very joyous moment for me as it would be for any mother to see her daughter in the kitchen for the first time. Farah is a sweetheart and whenever she meets me she always asks when I am sending her some Sindhi curry for her and her children so I thought I should prepare the same on the show.”