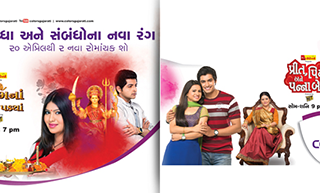 Gujarat: The only Gujarati general entertainment channel in the market, COLORS Gujarati is all set to enthrall viewers with a new beginning. Reflecting the distinctive tastes and traditions of the vibrant state of Gujarat through its differentiated content, the channel will launch 2 new shows with the brand change that goes live on April 20, 2015. This is a part of the recent announcement by India’s fastest growing entertainment network, Viacom18 on expanding its portfolio by rebranding five ETV regional general entertainment channels.

Elaborating on the same, Anuj Poddar – Business Head, COLORS Gujarati said, “The rebranded COLORS Gujarati marks a fresh beginning for entertainment in the state of Gujarat. We hope to carry forward the DilThi Gujarati legacy of this channel with the launch of the new shows while continuing to provide wholesome family entertainment to our viewers.”

Launching a socio – mythology show on the channel, Kumkum Na Pagla Padya chronicles the story of Kumkum,  a  devotee  of  Mataji.  The  villagers  believe  that  Kumkum  possesses  healing  powers  but Kumkum believes that faith doesn’t make things easy, it makes things possible. However, Destiny has other things in store for her and she is married to Jai, who suffers irreversible bipolar syndrome. Will her faith give her the strength to fight this battle? The show will be telecast every Monday to Saturday at 7pm. The show is produced by veteran actor/ producer – Sanjay Goradia under the banner of Sango Films.

Preet, Piyu Ane Pannaben is drama series based on the paradoxical relationship shared between a mother in law and her daughter in law. Most Gujarati families refer to their daughters in law as “aa amari vahu nahi pun deekri jevi j che but Pannaben says ‘aa mari vahu to deekri thi pun savai che”,placing the daughter in law above her very own daughter. This family entertainer will air every Mondayto Saturday at 9pm. Jay and Kinnari Mehta will be producing the show under the banner of JAY PRODUCTION.Elaborating on the new shows, Sanjay Upadhyay – Programming Head, COLORS Gujarati said, “We understand that Gujaratis thrive in closely knit families. The common thread of relationships runs through both our shows as well. We hope to appeal this very ethos of family and cultural beliefs whilst entertaining our viewers in the state.”

Contact your cable operator to ask for the channel number today!

COLORS Gujarati (Erstwhile ETV Gujarati) is the only Gujarati general entertainment channel reflecting the kaleidoscope of distinctive tastes and traditions of the vibrant state of Gujarat through its innovative and differentiated content. Some of our flagship shows have been Rasoi show, Flavours of Gujarat, Chhuta Chheda, Moti Baa, Geet Gunjan, Niharika, Mathabhare Manjula, Saval Eklakhno, 1760 Sasuma, Kanho Banyo Common Man and Daily Bonus amongst others.