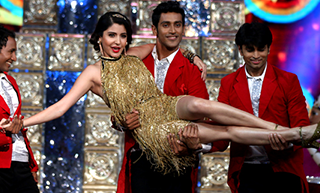 7th June, 2015, Kuala Lumpur:  The 16th S Cross IIFA Awards took over Malaysia with an outstanding show that witnessed Haider and Queen bag the highest honours at the night. The most coveted awards for Best Actor (Male) and Best Actor (Female) were presented to Shahid Kapoor and Kangana Ranaut respectively for their remarkable performances of the year.

The award for Best Picture went to Queen, while Rajkumar Hirani took home the award for Direction for PK. DeepikaPadukone won an award for IIFA Woman of theYear, she commented saying, “This one is for the millions of women who inspire me every day”. One of the many special moments on stage was Ranveer reciting a poem for Deepika.

Giving Indian cinema a global platform, the S Cross IIFA Awards was held at the Stadium Putra in Kuala Lumpur, Malaysia. For the first time ever, Bollywood’s hilarious duo- the talented actors Ranveer Singh and Arjun Kapoor played host to India’s most anticipated awards ceremony. The twosome won over audiences and industry members alike, leaving those present in splits with their witty quips, perfect comic timing and laudable on-stage camaraderie.

Their opening performance was a medley of iconic Jodi songs – Mein Khiladi Tu Anaari, Dola Re Dola, Mere Do Anmol Ratan where the two donned outlandish costumes keeping the audience in tears of laughter. They were joined on stage by the unstoppable Rakhi Sawant who took the entertainment quotient to another level.

Eminent film-maker Subhash Ghai was awarded for his Outstanding Contribution to Indian Cinema, he commented, “So many emotions I am going through, so many memories. That is why you fall, then rise, then rise again. Thank you, IIFA.”

Indian cinema’s fresh talents Tiger Shroff and Kriti Sanon were lauded for their debut performances and took to the IIFA stage to collect their awards while Kay Kay Menon bagged an award for the Best Actor in a Negative Role for his spectacular performance in Haider.

For the first time, the prestigious night of nights, S- Cross IIFA Awards will be broadcast globally on Colors.

About IIFA (International Indian Film Academy):
Conceptualized and produced by Wizcraft International Entertainment Pvt. Ltd. and supported by the key members of the Indian film fraternity, IIFA is the most appreciated South Asian film academy and a global platform that gives the Indian film fraternity an opportunity to reach audiences in international territories. The alliances made via the platform of IIFA provide huge benefits and gain to India but an equally important objective of this prestigious brand is to create similar outcomes in its host country.  The aim is to establish a system of mutual benefit to both India as well as the host destinations by boosting tourism, economic development, trade, culture, cross-border investments and film co-productions.

Wizcraft International Entertainment Pvt. Ltd promotes the IIFA Weekend & Awards globally each year and travel to new, exciting and beautiful destinations, taking the film fraternity with it to unite and celebrate the best of Indian film and culture, thereby taking Indian Cinema& India to a wider audience. www.iifa.com