Media
COLORS INFINITY Unveils Entertainment to the Power of Infinity 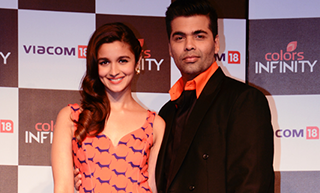 ~An India First : Introducing India to an enthralling experience of ‘Essential Viewing’~

~Handpicked by the Best Connoisseurs: Karan Johar and Alia Bhatt to co-curate line-up~

Mumbai, Date July 7 2015: Moving towards a new horizon in English Entertainment on Indian Television, the soon to be launched COLORS INFINITY is all set to break new ground by ushering in the growing international trend of ‘Essential Viewing’ – An immersive experience of watching three continuous episodes of globally applauded narratives back to back to back. The experience will be further augmented by the “First Indian TV Premiere” of a new show every day of the week that includes critically acclaimed & multi-award winning series like FARGO, ORANGE IS THE NEW BLACK, BETTER CALL SAUL, THE FLASH amongst others. The channel is Co-curated by Karan Johar and Alia Bhatt, bringing in a great blend of finesse and insight to the channel though curating world-class content.

On the latest offering from the Viacom 18 stable, Sudhanshu Vats, Group CEO, Viacom18, said, “In 2008, Viacom18 scripted the first few pages of its journey to establish its first milestone COLORS, thereafter disrupting the genre landscape. 2015 we once again embark on a journey to recreate history, this time in the English Entertainment space with COLORS INFINITY. Our first homegrown English entertainment channel for India – COLORS INFINITY, through its many firsts, is all set to subvert convention in the genre through providing a consummate viewing experience”

Talking about COLORS INFINITY’s new age content, Ferzad Palia, EVP, Viacom18 and Head, English Entertainment said, “COLORS INFINITY is set to be the absolute stage for the best in English language entertainment with its handpicked international content and extensive multi genre offering. Adding to the immersive experience, the innovation of facilitating essential viewing is set to be a definitive game changer through inviting newer audience and growing the viewership pie.”

Palia further added, “We are overwhelmed with the response of advertises and channel partners who have reposed tremendous faith in COLORS INFINITY and its proposition of bringing scale to the English genre. Our deep partnerships with eminent global brands like L’Oreal, Greygoose, Renault and Integriti is sure to add tremendous value to their endeavor of effectively reaching out to their ideal consumer.”

Speaking about Co-Curating COLORS INFINITY the suave and celebrated director and producer Karan Johar said, “I have always enjoyed television as a platform, I enjoy watching TV, I enjoy being on TV and now, this new role of helping curate a channel has been most exciting.”

Speaking on the great addictive content that COLORS Infinity is all set to bring to India, Karan added “India has been viewing a lot of international content, however, what we have accessed so far is just the surface. COLORS Infinity will transform the English entertainment market in India with an unmatched array of content for the globally connected Indian viewer. We are serving up the best of world content that straddles multiple-genre segments and emotions, all on one channel; a destination of infinite choices.”

Talking about the dynamic needs of international television viewers whom she represents and donning the new role of co-curator, the beautiful and multifaceted diva Alia Bhatt, said “I connect with Colors Infinity because it speaks my language, has my kind of shows and understands how a new generation of viewers wants it all and wants it now. So it’s fab that there’s a whole lot of new shows that we get to see without waiting ages for them to come to India. And also that we can watch episodes back to back. I enjoyed previewing shows with Karan and the Colors Infinity team and recommending which ones to go with (I voted Flash and Better Call Saul in the launch line-up).”

For the first time ever in Indian English GEC space, COLORS INFINITY will have first run programming 7 days a week. Showcasing unprecedented scale through 2000 Hours of international content acquired from the world’s biggest studios, the channel brings in the best with over 100 blockbusters TV series and more than 200 awards between them. Spanning genres such as Drama, Superheroes, Comedy, Fantasy, Crime and Thrillers from major studios like Warner Brothers International TV, NBC Universal, Sony Pictures Television, Twentieth Century Fox, Lionsgate, MGM, BBC and Endemol Shine amongst others, audiences will be spoilt for choice.

That is not all – Upping the ante will be an array of reality television with some of the world’s largest shows across Dancing, Cooking, Magic, Singing & other lifestyle interests. The channel will also host biggest global Live Events & Award shows, as also premium biopics, mini-series Documentaries and much more.

Available across DTH & Digital cable platforms, the channel will be aired in SD as well as 1080p HD format with Dolby 5.1 Surround Sound.