Media
The favorites are back! All new seasons of Better Call Saul and My Kitchen Rules on COLORS INFINITY 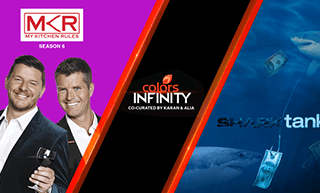 Mumbai, 29th January, 2016: This February, COLORS INFINITY fires up another round of explosive new seasons and Instant Premieres of much-awaited series premiering for the first time on Indian Television. The channel is all set to premiere the sixth season of hugely popular cooking reality show My Kitchen Rules on 9th February, and Season 2 of the highly-acclaimed international series Better Call Saul on 16th February, 2016.

Better Call Saul
The second season of the critically acclaimed Emmy award nominated series, continues to trace Jimmy’s evolution from small-time lawyer to smooth-talking manipulator Saul Goodman with a whole new set of twists and turns which keep viewers on the edge of their seats.
Catch the INSTANT PREMIERE of Better Call Saul S2 on February 16th at 11pm, every Tuesday, only on COLORS Infinity!

My Kitchen Rules
In an all-new exciting season, Contestants compete amongst one another as they prepare a three-course meal designed to impress their fellow contestants and esteemed judges to eventually take home the grand prize.
Watch the all-new season of My Kitchen Rules premiering February 9th at 8pm, every Monday – Friday, only on COLORS Infinity.

The two new shows will add even more punch to the already power-packed line-up of Shark Tank and Chicago Fire which have gained tremendous popularity since their premieres last month. It’s definitely going to be a fabulous February on COLORS INFINITY.