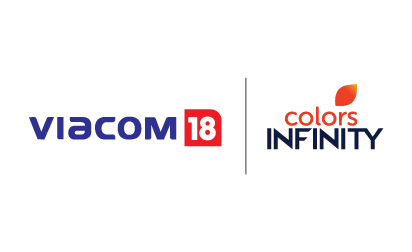 ~ Premiering 14 shows in 7 days, the channel ups the ante for English entertainment in India ~

~  Canvasing a larger viewer base, along with television, COLORS INFINITY & COMEDY CENTRAL are now available to over 250 million subscribers of JIO ~

National, October 8, 2018: COLORS INFINITY has been disrupting English entertainment on Indian television for over 3 years, with an unparalleled line-up of premium shows and clutter-breaking content. Creating properties like Essential Viewing, Instant Premieres, Live Binge, Live The Story and Infinity-On-Demand, the channel has been catering to the varying range of content needs of the ever-growing viewer-base. Adding to the already riveting bouquet of shows, COLORS INFINITY presented a host of homegrown shows including – The Stage, BFFs with Vogue and Top Model India.

A trendsetter in the category, COLORS INFINITY has successfully filled the void in viewers’ need for differentiated, day-and-date content. With a wholesome mix of genres, a strong line-up of local English productions and a disruptive programming strategy, the channel has been pushing the boundaries in English entertainment on Indian television. Augmenting its reach beyond just television, the channel enters the digital realm by proffering an absolute multi-platform experience concurrently to an additional 250 million subscribers of JIO TV.

Continuing to advance in this journey to the top, Ferzad Palia, Head – Youth, Music and English Entertainment, Viacom18 commented, “In a very short span of time, COLORS INFINITY has come a long way, unthwarted by the challenging environ in English entertainment. Aiming to continuously meet the expectations of our current viewers, while attracting new viewers at the same time, we’ve boldly experimented with our programming. This radical approach has established a distinct identity for the brand, which endorses our leadership position in the category. Proud to be a truly multi-platform brand, we are now making COLORS INFINITY and COMEDY CENTRAL available for simultaneous viewing on JIO TV. A significant growth in the advertiser base and revenue, is testament to our solid performance. As we look forward to the future with a refreshed look and a slew of best-in-class content, COLORS INFINITY will continue to dominate further on Indian television and digital platforms.”

INSTANT PREMIERES
Home of some of the most-adored superheroes like Barry Allen in The Flash, Oliver Queen in Arrow, Jefferson Pierce in Black Lightening and a band of many more in Legends of Tomorrow, Instant Premieres on COLORS INFINITY kicks the daylights out of boredom. Offering a tinge of twisted-thriller, the popular teen-drama Riverdale airs on the channel within hours of its international premiere. Pouring into the concoction of edgy programming, the channel adds crime, action, drama, suspense and much more with the international premieres of All American and Manifest; along with newest seasons of S.W.A.T, Blindspot and The Good Doctor. While, New Amsterdam and God Friended Me, give a taste of Indian flavor with Anupam Kher and Suraj Sharma starring in the ensemble cast of the shows, respectively; Legacies from the ‘Vampire Diaries’ franchise and The Last Ship complete the line-up of Instant Premieres on the channel.

INFINITE WEEKENDS
If weekend binge is your thing, COLORS INFINITY is your partner in crime; airing back-to-back episodes from a library of revered shows, including titles like Taken, Broadchurch, Peaky Blinders, Shades of Blue, Bates Motel and Kingdom to only name a few.

AND THERE’S MORE!
Offering a wholesome viewing experience, the channel’s matchless line-up also includes the most-watched and highest rated cult-comedy – The Big Bang Theory, along with titles in reality television like the tantalizing Bachelor Nation franchise – The Bachelor, The Bachelorette, Bachelor In Paradise and all new – The Bachelor Winter Games.

Come Monday night, COLORS INFINITY will further enhance the viewing experience for fans of English entertainment, airing irresistible show embellished with unique on-air programming, in a refreshingly new look and amplified vigor. Catering to an audience that is constantly looking for newer content, the channel brings only the best and latest seasons with a line-up of over 20 entertaining and engrossing shows.

With a strategic combination of disruptive campaigns that transcend beyond traditional channel marketing, COLORS INFINITY will continue to demonstrate its thought leadership to complement its exceptional assortment of programming.

ABOUT COLORS INFINITY:
COLORS INFINITY is Viacom18’s English General Entertainment Channel, under the flagship brand COLORS. Bringing a new horizon to English Entertainment in India, COLORS INFINITY will showcase internationally acclaimed television series spanning genres such as Drama, Superheroes, Comedy, Fantasy, Crime and Thrillers from major studios like Warner Brothers International TV, NBC Universal, Sony Pictures Television, Twentieth Century Fox, Lionsgate, MGM, BBC and Endemol Shine amongst others, and reality shows ranging from Dancing, Cooking, Magic, Singing & other lifestyle interests. The channel is also the host for the biggest global Live Events & Award shows, as well as premium biopics, mini-series Documentaries and much more. COLORS INFINITY aims to appeal to the neo-urban viewer and open-up a wider market by breaking the English language barrier. The channel is Available across DTH & Digital cable platforms, the channel will be aired in SD as well as 1080p HD format with Dolby 5.1 Surround Sound.