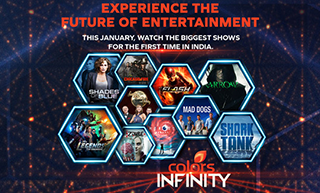 Mumbai, 6th January, 2016: This January, COLORS INFINITY rings in the New Year with a fresh line-up comprising of new set of Instant Premieres along with much-awaited series premiering for the first time on Indian Television. Starting January 8th, the channel will air a plethora of highly-anticipated international shows like Shades Of Blue, Shark Tank, Legends Of Tomorrow, Chicago Fire, to name a few.

Reiterating its promise of offering fresh and unique programming, co-curators Karan Johar and Alia Bhatt have hand-picked brand new shows that will appeal to the Indian audience. The series of premieres will be flagged off on January 8th with Shades of Blue, an all-new crime-drama series starring Jennifer Lopez as an NYPD cop. The premiere of Shades of Blue marks JLo’s return on fiction Television after almost 20 years. The channel will then fire its next salvo with more Instant Premieres of popular shows iZombie, Mad Dogs and the all-new superheroes spin-off from the Arrow and The Flash universe – Legends of Tomorrow.

Commenting on the exciting new line-up, Ferzad Palia, EVP Viacom18 and Head of English and Youth Entertainment said, “After shaking the genre awake from its deep slumber, COLORS INFINITY is set to enter the New Year with a magnum line-up. Each show has been selected keeping in mind the viewers’ interests and demands. With this new line-up, we aim to showcase a mix of various genres like crime-drama, comedy, sci-fi, path breaking unscripted content and a lot more, creating a wholesome entertainment experience.”

Shows To Watch Out For:

Shades of Blue
Jennifer Lopez stars as New York detective Harlee Santos, a single mother who runs with a group of dirty cops, taking her cut of the bribes and protection money to give her bright and promising daughter the best life possible and a leg up for a better future. However, all good things must come to an end and she is caught by the FBI, which forces her to turn informant on her cop family. Harlee struggles to walk a line between loyalty, honor and betrayal, all the while working to keep everything together for her daughter.
The Instant Premiere of the exciting crime-drama show, Shades of Blue is all set to hit the TV screens in India on Friday, 8th January, 11pm only on COLORS INFINITY

Chicago Fire
The firefighters, Rescue Squad and paramedics of Chicago Firehouse 51 are deeply committed to their rewarding and exhilarating jobs, despite the inherent danger and stressors. The truck company is led by Lt. Matthew Casey, who sometimes butts head with the leader of the Rescue Squad, the brash Lt. Kelly Severide. Regardless of personal tension, when it’s time to face the job, all the courageous team members quickly put their issues aside and their lives on the line.
Catch the intense series every Monday to Friday at 10 PM on COLORS INFINITY starting 12th January.

Legends of Tomorrow
In the year 2166, the immortal villain Vandal Savage is on the verge of his final victory – total chaos and the utter destruction of humanity. As the world crumbles, the Time Master Rip Hunter takes matters into his own hands; he travels 150 years into the past to assemble a carefully selected team of heroes and rogues to stop him.
Watch super-villains and super-heroes team up to save the world on Legends of Tomorrow premiering on 22nd January, 2016 at 7pm only on COLORS INFINITY

Mad Dogs Season 1 (USA)
Mad Dogs is an American version of the British dark comedy that portrays the spirit of friendship, but with a twist. The much-awaited Instant Premiere will air on COLORS INFINITY every Monday at 11 PM, starting 25th January.

About COLORS INFINITY
COLORS INFINITY is Viacom18’s English General Entertainment Channel, under the flagship brand COLORS. Bringing a new horizon to English Entertainment in India, COLORS INFINITY will showcase internationally acclaimed television series spanning genres such as Drama, Superheroes, Comedy, Fantasy, Crime and Thrillers from major studios like Warner Brothers International TV, NBC Universal, Sony Pictures Television, Twentieth Century Fox, Lionsgate, MGM, BBC and Endemol Shine amongst others, and reality shows ranging from Dancing, Cooking, Magic, Singing & other lifestyle interests. The channel is also the host for the biggest global Live Events & Award shows, as well as premium biopics, mini-series Documentaries and much more. COLORS INFINITY aims to appeal to the neo-urban viewer and open up a wider market by breaking the English language barrier. The channel is Available across DTH & Digital cable platforms, the channel will be aired in SD as well as 1080p HD format with Dolby 5.1 Surround Sound. For more information on COLORS INFINITY, please visit – http://www.colorsinfinity.com/