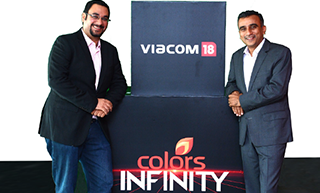 The brand new channels will be co-curated by the multi-faceted celebrity duo – Karan Johar and Alia Bhatt – passionate viewers of international content. As creators and consumers of gripping content themselves, their biggest contribution to the channel would be to design a disruptive and addictive show line-up to bring a great blend of insight and finesse to COLORS INFINITY. The channels will be available across DTH & Digital cable platforms.

On the latest offering from the Viacom 18 stable, Sudhanshu Vats, Group CEO, Viacom18, said, “Today, we are the world’s second largest English speaking population and live in an environment where English is seen as a ladder to personal progress. The market is widening its appeal across viewers who think and speak in English, but haven’t been invited to consume international entertainment yet. COLORS INFINITY aims to speak to this larger audience which goes beyond the metros and has never been addressed by the category. English is an extremely important space for us and with this move, we will further strengthen our share in the category.”

The channel boasts of never-seen-before content in India, both scripted and unscripted, that will span genres such as Drama, Superheroes, Comedy, Fantasy, Crime and Thrillers. Additionally, there is a special focus on Reality television with some of the world’s biggest shows across Dancing, Cooking, Magic, Singing & other lifestyle interests. The channel will also play home to some of the biggest global Live Events & Award shows, as also premium biopics, mini-series & documentaries.

Talking about COLORS INFINITY, Ferzad Palia, EVP, Viacom18 and Head, English Entertainment said, “Globally, television series have become a force to reckon with, be it in terms of scale of production, Hollywood actors being cast, quality of story-telling, writing and in many other ways. This is the ‘golden age’ of television. COLORS INFINITY, with its sheer breadth of offering and carefully selected content from across global markets, will be the definitive platform for the best in English language entertainment across genres. Freshness will be at the core of what we do, be it the content we air, scheduling strategy or marketing. Our objective is to grow the category by broadening the appeal and reaching to a wider base.”

On having Karan and Alia on board as co-curators, he further added “Karan and Alia have been an integral part of our decision making process. Their perfect blend of insight and finesse has helped shape our content selection and brand. We’re delighted to welcome them to the COLORS INFINITY family and to work closely with them.”

The channel is slated to release information regarding its mega show line-up and programming schedule along with the marketing strategy, in the days to come.