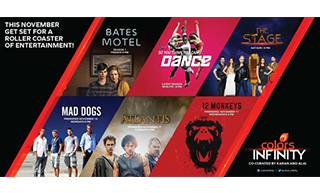 Each series premiering in November has been hand-picked keeping in mind its unique content and distinct genre.

Here’s what to watch out for:
Setting a benchmark for all aspiring dancers across the globe, So You Think You Can Dance has become one of the longest running dance reality shows on television. Season 12 of the legendary quest now comes to India with Paula Abdul and Jason Derulo as new judges of the show. They will be seen judging the talent with existing judge Nigel Lythgoe. The new season will also mark Cat Deeley’s 11 years of consecutively hosting the show. The biggest dance reality show in the world, premieres on COLORS INFINITY, tonight at 8 PM.

A contemporary prequel to Alfred Hitchcock’s 1965 psycho-thriller; Bates Motel is a series of drama-thriller depicting the lives of Norman Bates and his mother Norma after buying a motel in White Pine Bay, premiering on COLORS INFINITY on 6th November, 9 PM.

Sci-fi thriller 12 Monkeys highlights the theme of time-travel where a time traveler from the post-apocalyptic future who appears in present day on a mission to locate and eradicate the source of a deadly plague that will nearly destroy the human race. The highly acclaimed series premieres on 11th November, 9PM only on COLORS INFINITY.

Mad Dogs is a dark comedy that portrays the spirit of friendship, but with a twist. The intense series premieres on COLORS INFINITY on 16th November, 9 PM.

Atlantis is a highly-acclaimed British-Fantasy show inspired by Greek Mythology. The show premieres on 17th November, 9 PM, only on COLORS INFINITY with 3 back-to-back episodes.

This diverse line-up ensures complete entertainment for viewers from across the nation.
The channel has consistently catered to its viewers with back-to-back episodes, instant premieres and the first homegrown English music talent show in India. Now with an all new November line-up, COLORS INFINITY heads for even newer horizons.