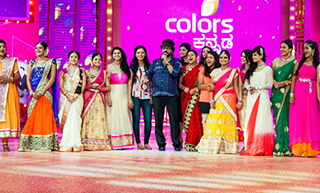 Bangalore: After 14 long years of wholesome family entertainment, ETV Kannada is now all set to enthrall viewers in a fresh innings as COLORS Kannada. Reflecting the distinctive culture and traditions of Karnataka through its differentiated content, the brand change goes live on April 26, 2015. This is a part of the recent announcement by one of India’s fastest growing entertainment networks, Viacom18, on expanding its portfolio by rebranding five ETV regional general entertainment channels.

Having created a special place in the hearts of the Kannadiga, COLORS Kannada takes the legacy forward with the new brand philosophy – “Onde Sambandha, Ade Anubandha”. The channelpromises a week of high octane entertainment that will culminate into spectacular a celebratory gala on 26thApril marking the metamorphosis of this journey.

Elaborating on the same, Ravish Kumar, EVP Viacom18 and Project Head – COLORS Kannada, COLORS Bangla and COLORS Odiya said, “These are exciting times for Kannada television – as we enter this new phase of growth, consumer delight shall continue to be the key driver for COLORS Kannada. We hope to up the ante and continue the surprise viewers in the future too.”

Parameshwar Gundkal, Business Head – COLORS Kannada further added saying, “We have excelled in providing innovative and engaging content that has delighted viewers and set new standards for both the market and for us to surpass. We further hope to make COLORS Kannada the one stop for Kannada entertainment.”

About COLORS Kannada
COLRS Kannada (erstwhile ETV Kannada) mirrors the cultural heritage of the rich Kannada culture with qualitative and innovative programming. A family entertainment destinations, the channel endeavors to entertain its viewers through distinctive and differentiated content, Some of our flagship shows have been programmes like Papa Pandu, Silli – Lalli, Manvantara, Muktha, Mudalamane, Mahanavami, Muktha Muktha, Ninnolumeyindale, Shubhamangala, Dance Karnataka Dance League, Bigg Boss, Mane Munde Mahalakshmi, Puttagowri Maduve, Lakshmi Baaramma and Charanadaasi amongst many others. The channel through its quality content and scale continues to engage with viewers across Karnataka and beyond.