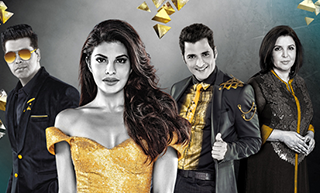 ~Sizzling dance extravaganza to pack- a-punch once a week starting 30th July 2016, every Saturday at 10:00 PM on COLORS~

Mumbai, 27th July 2016: Following the path breaking performances of the previous seasons, Cadbury Bournvita presents Jhalak Dikhhla Jaa co-powered by Renault and Amazon.in is all set to bring to the viewers another season of extraordinary celebration of dance and the gamut of emotions that comes along with it. Turning the stage into a beautiful canvas, the 12 talented “stars” will take to the stage to flaunt their passion for dance in front of the celebrated panel of judges – Jacqueline Fernandez, Karan Johar, Farah Khan and Ganesh Hegde. With Manish Paul as the host and 12 spirited contestants in tow, Jhalak Dikhhla Jaa, produced by BBC Worldwide Entertainment, will enliven television screens starting 30th July 2016, every Saturday at 10:00 PM on COLORS.

Commenting on the new season of Jhalak Dikhhla Jaa, Raj Nayak, CEO – COLORS said, “What surprises me every year and pushes us as a channel to put together a show of such mammoth proportions is the enthusiasm of the celebrities who astonish us with their eagerness to participate in the show and bring out their flair for dance in front of their zillion of fans. The platform is so huge that whether you win or lose, you take away something from the show which holds you in good stead for years to come.
Along with Karan and Ganesh, we have on board this year the very dazzling Jacqueline Fernandez who has been keen on making her television debut through this show. Then there’s our favourite Farah Khan who oozes entertainment in everything that she does.”

He further added, “Jhalak Dikhhla Jaa and Cadbury Bournvita, presenting sponsor, is a wonderful match – our five-year-long partnership is testimony of the strong relationship we share to not only create innovative brand integration avenues but also leverage our combined brand goals. Further, we would like to extend a warm welcome to Renault and Amazon.in as the show’s co-powered by sponsors and hope to strengthen our association with them through many such marquee shows.”

Manisha Sharma, Programming Head – COLORS, said, “This season goes back to the basics of dancing, making the contestants showcase each performance striking a balance of uninhibited oomph, innate grace and a brilliant sense of rhythm. While the jury will share their expert opinions, the in-studio audience has the veto power to choose which contestants will stay or will be evicted. Each contestant will have one mission: to create a lasting impression with their dance moves.”

Jacqueline Fernandez said, “My journey in the spotlight started as a beauty pageant contestant on a stage, and today I am a judge on Jhalak Dikhhla Jaa. Life has truly come a full circle for me. As a judge, I am looking for wholehearted and honest performances filled with passion for the art of dancing. There is just so much to dance and I hope to have a lot of fun as a part of my journey on Jhalak.”

Speaking on his longstanding association with the show, Karan Johar said, “Jhalak Dikhhla Jaa is the one dance show which has remained true to its core concept and has always entertained viewers while encouraging their passion towards dance. Every year I am amazed to see contestants trace their respective journeys from being novices to expert dancers. This year, while dance and zeal will be on our radar, I am looking for the ultimate performer who will be able to withstand the fierce competition and showcase their absolute best.”

Known for his keen eye for detail, Ganesh Hegde said, “What impresses me most about Jhalak Dikhhla Jaa is that it has transformed the lives of many passionate dancers and added spunk to their personalities. It introduces them to a world of opportunities and creativity allowing both – the celebrity and their choreographer – to experiment with varied dance forms and put together an entertaining act. I am looking forward to witnessing interesting stories come alive on stage through dance and join them in their journey of becoming impeccable performers.”

The multifaceted Farah Khan said, “I started my career as a choreographer and there’s nothing more exciting for me than dancing. The contestants look promising. Some of them are even coveted dancers and performers. I’m certain that this season is going to be edgier than ever before. Can’t wait for the thrill of the ride.”

Myleeta Aga, SVP and GM, BBC Worldwide, India and Content Head Asia, “We are very excited to see Jhalak Dikhhla Jaa, the Indian adaptation of BBC Worldwide’s acclaimed format Dancing With the Stars grow from strength to strength each season. There have been more than 270 series of strictly worldwide, in 51 countries ranging from Mexico to South Korea and it has been incredibly successful in India. This is our 9th season producing the award-winning series. More than ever, we are committed to deliver a high octane series  with superior international production values. This year, the show’s lavish sets and its take on unprecedented hotness and dance promise to magnify the overall production value which will keep audiences glued to their television sets.”

Ahead of the launch of the show, COLORS’ is undertaking several marketing and digital initiatives to generate conversations around the hotness factor of the show. For traditional marketing, a focused outreach incorporating mediums including OOH and on-ground activations have been planned. To further drive contestant and audience engagement, a spate of digital activities is being sketched out under the hashtag #JhalakHottie.

Gear up as Jhalak Dikhhla Jaa makes your Saturdays too hot to handle, starting 30th July, 2016 every Saturday at 10:00 PM on COLORS!