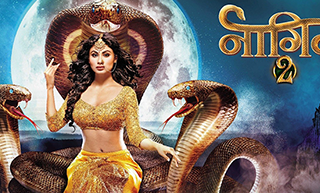 ~ Naagin 2 will slither into television screens starting 8 th October 2016, every Saturday and Sunday at 8:00 PM on COLORS ~

Mumbai, 4 th October, 2016:  When Naagin first premiered on COLORS last year, it shook the foundations of conventional viewership to carve a path as the No.1 blockbuster on Indian television.Shivanya’s (Mouni Roy), an ichhadhari naagin, life took precedence as she sought revenge while guarding the nagmani from evil beings with her love, Ritik (Arjun Bijlani) by her side. And now it’s,Shivanya’s daughter, Shivangi’s turn to take the legacy forward as COLORS’ record-breaking finite fiction series returns for a brand new expedition with Naagin 2. Hoping to protect Shivangi from the naagin gene and a cursed fate, Naagin 2 will see Shivanya battling her legacy. Returning to the show for a second extraordinary season will be actor Mouni Roy, who will don the dual avatars of Shivanya and Shivangi, along with Adaa Khan (Ruchika and Sesha), Sudha Chandran (Yamini) and Aashka Goradia (Avantika). Shivangi will find love in the arms of Rocky (Karanvir Bohra). Set against the scenic hills of Dehradun, Ekta Kapoor-led Balaji Telefilms’ formidable offering Naagin 2 premieres on 8th October 2016, every Saturday and Sunday at 8:00 PM on COLORS.

Commenting on the second edition of Naagin, Raj Nayak, CEO – COLORS said, “Naagin has been a gloriously successful proposition for us, whose precise casting, gripping narrative and flawless execution has found appeal with audiences across the country, and has redefined the 8:00 PM slot on weekends. As content creators our challenge with a show like this was to weave the perfect narrative connecting childhood folklore to its real life projection on screen, thus making Naagin a landmark show. It has been the numero uno show amongst Hindi GECs and the feedback that the rushes have received gives us confidence that the second edition will surpass all previously set benchmarks.”

Naagin, in its first season, highlighted a saga of love laced with revenge. As the story drew to a close, Naagin featured triumph over evil as Ritik (Arjun Bijlani) and Shivanya became parents to a young girl, Shivangi. And, as the sands of time flow, Naagin 2 will progress by 24 years, now focusing on Shivangi’s life as she blossoms into a young woman, against the scenic backdrop of Dehradun. Whilst on one hand Shivangi is oblivious about her mother’s true identity and her history, Shivanya hopes that her daughter will be spared from the naagin gene – a truth that will only be revealed on Shivangi’s 25 th birthday. But as Ritik and Shivanya’s progeny, Shivangi has an additional responsibility – to protect the nagmani from evil elements. As the family awaits its fate, Shivangi will fall in love with Rocky (Karanvir Bohra), Yamini’s (Sudha Chandran) adopted son, thereby reopening the doors of the past left far behind. But eventually it is Shivangi’s love for her mother, her sense of duty towards her naagin legacy, and her battle against evil to safeguard her love and the nagmani, which will empower her to unfold the buried pages of her family’s history.

Commenting on the show, Manisha Sharma, Programming Head – COLORS said, “With Naagin we opened up another genre of entertainment for the viewers. Naagin 1 created history with its compelling storyline to become the unprecedented No.1 show on Indian television. And now, as we kick-off Naagin 2, here’s another tale with a shape shifting snake at his helm that will once again make fantastical characters television’s newest stars.”

Elaborating about Naagin 2 further, producer Ekta Kapoor of Balaji Telefilms said, “Naagin is a very special show for me. The show marked my first foray in the mystical genre, and empowered us to explore a different kind of storytelling altogether. As we march onwards, we bring together not only the show’s original cast, but also a volley of newer faces who will narrate Shivangi’s tale, as she takes the mantle of being the nagmani’s protector forward. This season we are raising the bar on visual effects to incorporate newer technologies, and will put together a tight and engrossing narrative to heighten viewer experience and build intrigue like never before.”

Speaking about her character Shivangi, actor Mouni Roy said, “Naagin has been an incredible journey for me; essaying Shivanya has been a huge milestone for my career. As we come back with Naagin 2, I am now facing a dual challenge – it’s my first attempt at a double role, as Shivanya and also her daughter Shivangi. Both characters have varied nuances to their personalities that make them quite complex. I am looking forward to this new journey and hope to live up to the audiences’ expectations.” Adding further, actor Karanvir Bohra aka Rocky said, “Naagin today enjoys a cult following. My character ‘Rocky’ has an independent outlook towards life; he is very different from any of the characters i have played till date. He is an out-and- out romantic who finds himself enraptured by Shivangi’s love, and strives to bring happiness to her life. It’s an honour for me to be a part of a path-breaking show and to work again with both – Balaji Telefilms and COLORS. I hope that, collectively, we are able to achieve new milestones with Naagin 2.”

Stay tuned as the epic reptilian saga of love and revenge takes over your television sets with Naagin 2 starting 8 th October 2016, every Saturday and Sunday at 8:00 PM on COLORS.