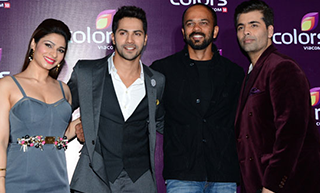 COLORS celebrated its 7th anniversary in a glittering party which brought together the biggest names from the world of films and television. The evening kicked off with a leadership marketing awards which presented awards to the best of the best from the world of advertising, marketing and media. Actor Hrithik Roshan, who won the award for the Brand Visionary of the Year – Male, walked on stage with his sons Hrehaan and Hridaan. While the three Roshans wore matching outfits, it was the moment when Hrehaan and Hridaan thanked the audience for awarding their father that had everyone eating out of their hands. Actor Shraddha Kapoor also bagged the award for the Brand Visionary of the Year – Female.

Bollywood turned out in full strength to support COLORS in a glitzy party which witnessed faces like Karan Johar, Sridevi and Boney Kapoor, Alia Bhatt, Rohit Shetty, Siddharth Malhotra, Varun Dhawan, Madhuri Dixit and Sriram Nene, Farah Khan, Anil Kapoor, Anupam Kher, Kapil Sharma, and a volley of television artists who have been a part of the COLORS family. The stars let their hair down as they danced and rejoiced while partaking in the channel’s success. Among the faces from the world of television who made their presence felt were Sumona Chakravarti, Toral Rasputra, Avika Gor, Manish Raisinghani, Vivian Dsena, Arjun Bijlani, Deepika Samson, Ashish Chaudhry, Gautam Gulati and Gaurav Chopraa to name a few.