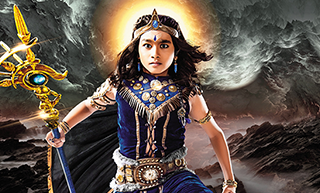 ~ With the beautifully crafted entertainer tracing the life of the ‘Karma-giver’, COLORS strengthens its weekday primetime line-up ~

Mumbai, 3rd November 2016: Scriptures say that life is an infinite chain of results of our actions (Karma). And the way the results of Karma are delivered in life forms the universal Law of Karma as we know of it. We have heard of adages like “Law of Cause and Effect” or “As you sow, so you reap”. Here’s presenting the narrative of one of the most misconstrued Lords from the Hindu scriptures who was born to balance your karmas so that you counted your blessings and became grateful to the universe for your existence.
He was conceived for righteousness. Born to Surya Dev and blessed by the Trinity of Lords Brahma, Vishnu and Shiva, his brand of justice remains unchallenged till date. Come 7th November 2016, COLORS is all set to unfold an unparalleled magnum opus narrating the saga of the most powerful and misunderstood deity through, Karmphal Data SHANI. The show will trace Shani’s life as he faces injustice at the hands of his father, Surya Dev, upon birth, and leads up to him becoming the penultimate messiah of justice maintaining a delicate balance between the Devta and Asura worlds. Creatively pieced together through extensive research into India’s deep culture, rituals and traditions, Karmphal Data SHANI touches upon the sense of superiority and dominance that dictates our karma. An epic tale with a magnanimous setting laden with visually spectacular grand and opulent themes, Karmphal Data SHANI, produced by Swastik Productions, will air every Monday to Friday at 9:00 PM on COLORS.

Commenting on the launch of the show, Raj Nayak, CEO – Hindi Mass Entertainment, Viacom 18 said, “Karmphal Data SHANI is our dream project. The rationale behind investing in a show of such mammoth proportion is the fact that it augments the core vision of our channel i.e. to indulge everyone through variety content. The other vital reason is that shows like Ashoka and Shani promote cohesive viewing. It imparts knowledge and spreads awareness. It’s a differentiator from the family dramas dominating the primetime.”

He further added, “We believe that with a captivating narrative like Karmphal Data SHANI, our weekday primetime is going to consolidate even further. Naagin has proven to be a game changer and is ruling the charts, and the unique love story of a eunuch has found its own fan following with Shakti – Astitva ek Ehsaas Ki standing tall at the Number 2 position. We are hopeful that the discerning storyline of Karmphal Data SHANI will surely make an impact in the 9:00 PM primetime slot.”

The show will transport the viewers to an era where the volatile relationship between the Devtas and Asuras led to the ‘Devasur Sangram’ – the ultimate battle for dominance. As the war turns fiercer, Lord Shiva intervenes to announce that the Trinity is making way for a new energy that will maintain the balance between good and evil. And thus, Shani is born. A child born to the god of light, Surya Dev and
Chhaya, his wife Sangya’s shadow, Shani is scorned at birth. Banished from Suryalok to be raised by Chhaya in a forest, Shani begins his journey on the path of karma. As he grows older, he unflinchingly continues to deliver justice in the toughest situations, giving preference only to the supreme truth.

Speaking about the new fiction offering, Manisha Sharma, Programming Head – COLORSsaid, “Karmphal Data SHANI projects a magnificence that has never been seen on Indian television in the past. Picking cues from an era before the any civilization came into being, Shani ventures into the depths of the Hindu scriptures to narrate a tale that has, thus far, been lesser known. Bringing in a new perspective, the show will illustrate the misunderstood God in a new light and strive to present his endearing tale through an entertaining proposition. The show will be a visual treat for the viewers akin to a silver screen experience in terms of VFX and production value. Apart from an intriguing storyline, we have given abundant importance to the setting and grandiosity of the show. It is definitely going to be one of the meaningful TV series to look forward to.”

With its core in Indian celestial mythology, the show’s set and costume design maintains a strong element of authenticity and connects with the Vedas in its visual appeal. Spread across 60 thousand square feet in Umbergaon, the four distinctly different and luminescent settings – Swarg-lok, Patal-lok, Surya-lok and a dense forest intricately designed keeping the era’s aesthetics alive, add authenticity to Shani’s tale. Apart from the colossal sets, the show has also been shot extensively at various exotic locales across the country including Leh-Ladakh. The intricately designed costumes and jewellery are rooted in Indian mythology with gemstones and monochromatic outfits which aid personification of the characters with elan. The grandeur laden sets and detailed looks of the characters, combined with VFX effects rivalling international standards will take viewers on an unprecedented journey into the depths of our culture and beliefs.

Speaking about the scale and production value of the show, Siddharth Kumar Tewary, Founder and Creative Director, Swastik Productions said, “We have always strived to present compelling content from the pages of our holy scriptures. With Karmphal Data SHANI, we aim to dismiss all misconceptions about Shani Dev’s motives and origins. Our teams are working tirelessly to present a larger-than-life canvas living up to the divinity of the era, and present an offering which will appeal to the audiences’ sensibilities.”

To promote this magnum opus and bring the tale of Karmphal Data SHANI closer to viewers, COLORS is planning an elaborate impact and reach-driven marketing blitzkrieg at multiple touchpoints. A specially designed OOH innovation will see hoardings projecting the power of Shani, including bringing on an eclipse in the blink of an eye. In terms of on-ground activations, COLORS is organizing a one-of-its-kind ‘Punya Ke Ghade Mein Tael Chhadao…Punya Ki Jyoti Jalao’ promotional campaign outside prominent temples like Shani Shinganapur near Aurangabad and Shri Hanuman Temple in Lucknow. The channel will encourage devotees to pour oil in the ‘Paap Ka Ghada’, a huge vessel installed outside these shrines, as an offering to Lord Shani. The oil collected through these ghadas will further be donated to the temples for lighting diyas. Another activation is being planned along Mumbai’s metro network at Andheri and Ghatkopar, urging travelers to participate in a contest to win free rides. Along with the marketing strategy, COLORS is also working towards an extensive digital campaign, dismissing misconceptions about Lord Shani, and reaching out to viewers on social media platforms. The Presenting Sponsor on Shani is Dabur Chyawanprash.

Stay tuned as the balance between right and wrong meets its match in pure karma, on Karmphal Data SHANI, starting 7th November 2016, Monday to Friday at 9:00 PM on COLORS