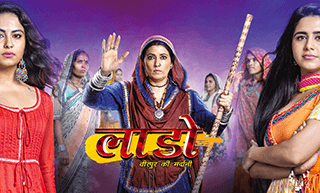 Premiering on 6th November 2017, the show will air every Monday to Friday at 9.30 PM

Mumbai, November 1st, 2017: Mumbai: Worshipped as a Goddess; suppressed for being the weaker sex — in a country that is shrouded with contradictions, a woman must struggle to find her rightful place in the society. Gender equality is an issue that women have faced since time immemorial. Bringing alive the tale of strong and resilient women, COLORS is set to launch the second chapter of its iconic and simulating drama,  Na Ana Iss Des Laadowith Laado – Veerpur Ki Mardaani. Premiering on 6th November, the show will air every Monday to Friday at 9.30 PM on COLORS.

Produced by Dhaval Gada Productions, Laado – Veerpur Ki Mardaani traces the life of Amma ji years after the closure of the first chapter; with her raising her granddaughters far away from the land she called her own. Making a comeback in this riveting plotline, Meghna Malik reprises her role as the fierce Ammaji with the same boldness and intensity as she did in its first season. The show will also feature the versatile Avika Gor as the protagonist – Anushka whose firm belief in law weaves together the thread of this narrative along with Palak Jain as her sister, Janvi.

Commenting on the launch of the show, Manisha Sharma, Head – Content, COLORS said, “Na Ana Iss Des Laado, at that time was a very strong character based story that did very well for COLORS. Looking at the socially relevant shows on our network and with the success of strong character based shows like, Shakti Ek Ehsaas Ki and Udaan we decided to get Laado back but with a very exciting twist. Hope the viewers will enjoy watching the two very impressive  faces, Avika Gor and Amma ji (Meghna Mallik) create ripples together on screen.”

Elaborating on the same, producer Dhaval Jayantilal Gada said, “It’s been quite some time since we’ve been developing the concept of this edition of Laado. The return of Meghna Malik as the formidable Ammaji alongside Avika who has been one of the most loved faces of Indian television brings to life our vision for this show. Supported by an ensemble cast with some very powerful performances, Laado Veerpur Ki Mardaani is sure to appeal to viewers across India.”

Commenting on portraying the complex character of Ammaji, Meghna Malik said, “Ammaji in this edition of Laado is different in mind, body and appearance. Earlier, being the victim of a certain mindset, she was not in favor a girl child. This time around – she will be seen championing the cause of women and addressing sensitive issues of women’s dignity, safety and rights.”

On essaying the role of Anushka, Avika Gor said, “The show has a legacy attached to it and this second chapter will see a fresh take on the issue of women rights. I feel very privileged that I was chosen for a show that has so much relevance in today’s day and time. COLORS has been my home turf and together we have given the viewers iconic shows like Balika Vadhu and Sasural Simar Ka. My character of Anushka reflects the brave and independent young woman of today who fights for what is right, no matter what, and this is something that I believe will resonate with the audiences deeply.”

Set in the modern day, the story opens in Delhi where Ammaji, who has given up her volatile past, is living a sedentary retired life in Delhi with her two loving granddaughters. However, a twist in fate leads them to Veerpur  (in Haryana) which is now a grim place full of notoriety, blood and violence. The show also features a stellar line-up of actors including Balwant Singh Chaudhary (Rituraj Singh), Ranbeer (Ankit Raj), Komal (Zalak Desai), Tej Singh Chaudhary (Himaan Chodhery) and Sunehri (Sudipti Parmar) amongst others who will be playing pivotal roles.

About VIACOM 18:
Viacom 18 Media Pvt. Ltd. is one of India’s fastest growing entertainment networks and a house of iconic brands that offers multi-platform, multi-generational and multicultural brand experiences. A joint venture of Viacom Inc. and the Network18 Group, Viacom18 defines entertainment in India by touching people on air, online, on ground, in shop and through its cinema.