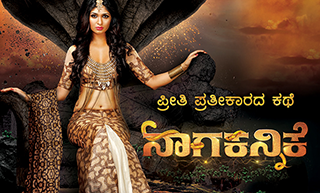 National, Thursday, June 22nd: Transcending riveting stories into compelling shows, within one year COLORS Super has continually been garnering viewers’ attention across the board. Showcasing unconventional and uncanny content to be enjoyed by all, COLORS Super yet again brings to the viewers a supernatural mystical thriller – NAAGAKANNIKE. Starting Monday, June 26th at 7:30pm, the story of the shape-shifting serpent comes alive on Kannada television.

Following the story of the protagonist Shivani – a Naagin, played by Adithi Prabhudev, who ventures on the quest to avenge the murder of her parents while protecting the nagmani. In her pursuit to find the killers, Shivani falls in love with Preetham played by Shivakumar. Entangled in her miasma to get revenge and her feelings for Preetham, Shivani will be facing the penultimate choice of her existence.

Vaishnavi H.S – COLORS Super, Programming Head, commented “The Kannada GEC industry has been growing exponentially, with a wider variety of content and the viewers being spoilt for choice. At COLORS Super, we primarily focus our efforts at avoiding monotony and only providing innovative and more engaging content for our viewers. Supernatural thrillers have been experimented by many and appreciated as well, but with Naagakannike we have raised the bar by working with the best technicians and meeting top industry standards in terms of scale and production.”

Sudhanva Deraje – Fiction Head, COLORS SUPER added “Naagakannike is unlike another mystical thriller shows; with a gripping storyline, an eminent ensemble cast along with an experienced and distinguished crew, that makes for a spectacle and a very entertaining show. We have carefully crafted Naagakannike to suit the viewers’ preferences and are certain that the show will receive a lot of adulation.”

Don’t miss the mystical thriller – Naagakannike premiering on June 26th every Monday to Friday at 7:30PM only on COLORS SUPER Channel!

About VIACOM18:
Viacom 18 Media Pvt. Ltd. is one of India’s fastest growing entertainment networks and a house of iconic brands that offers multi-platform, multi-generational and multicultural brand experiences. A joint venture of Viacom Inc. and the Network18 Group, Viacom18 defines entertainment in India by touching people on air, online, on ground, in shop and through its cinema.