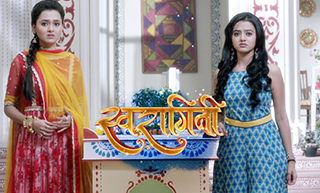 Mumbai, February 26, 2015: Some relationships bring joy; some bring sadness and some bring anger just by the virtue of being broken beyond repair. This March, COLORS joins hands with Rashmi Sharma Telefilms to present an all-new television offering, Swaragini, which is set in the milieu of culturally rich Kolkata. The show narrates the story of two warring neighborhood families – the Bose and Gadodia families with diverse value systems. Swara and Ragini the daughters from these two families have distinctly different personalities shaped by their upbringing. Swaragini is a journey of how Swara and Ragini discover their true identities and hold onto their family ties and ideals in a fractured and uncordial environment which is a result of a concealing past. Whether they will be able to bridge the ever-widening divide between their families is, in fact, the question of the hour. Swaragini is set to hit airwaves starting 2nd March, 2015 and will air every Monday to Friday at 9:30 PM on COLORS.

Speaking about the launch of Swaragini, Manisha Sharma, Programming Head – COLORS,said, “Drama and entertainment are two essentials of a television offering which make for a gripping watch. As we venture into unchartered territory while exploring the fresh backdrop of Kolkata in Swaragini, our focus remains on creating a narrative that will enthrall viewers. The legendary divide between different cultures and their subsequent dysfunctional relations are at the helm of Swaragini’s storyline. The show will be premiering in the 9:30 PM primetime timeslot which will bring the tale featuring real and identifiable characters suitable for family viewing.”

Swara (played by Helly Shah)and Ragini’s (played by Tejaswi Prakash) dissimilar personalities are primarily influenced by their grandmothers Shobha (essayed by Tanima Sen) and Parvati (essayed by Alka Kaushal) who also hold tight reins over Swara’s mother Sharmishtha (portrayed by Parinita Borthakur) and Ragini’s father Shekhar (portrayed by Sachin Tyagi) respectively. The show builds on the love-hate relationship that runs deep in the psyche of Kolkata – a divide between the articulate, thoughtful Bengalis and the fierce, ambitious Marwaris.

Outspoken and vivacious as her role ‘Swara’, Helly Shah said, “Being a thoroughbred Jain, playing a Bengali character in Swaragini has been quite a challenge for me. Understanding the nuances of the culture and the inherent qualities that make a Bengali unique has been an incredible experience for me. The entire team of the show has been extremely patient as we trained and molded ourselves to fit into our characters perfectly. Nervous energies are now at an all-time high and I hope that the viewer’s enjoy watching the effort that we have put into making this show.”

Tejaswi Prakash who essays the character of the demure and down-to-earth Ragini commented, “My character Ragini is a quiet and reserved girl who is rooted to her traditional culture and cannot even dream of disobeying authority. This is quite a challenge for me because I am nothing like her in my personal life. Playing a Marwari girl whose outlook towards life is completely different while interacting with a cast that has such diverse experience in television and films has been a tremendous experience for me. Now, I only hope that my fans and viewers appreciate the effort that we have put in towards making Swaragini and support our endeavor.”

To ensure that the authentic feel of Kolkata trickles through the entire show, a special set has been designed in Mumbai which recreates Kolkata and brings alive the different nuances which the make the city a truly delightful treat for viewers.

Commenting on her brand-new television venture, producer Rashmi Sharma from Rashmi Sharma Telefilms, said, “Swaragini is a family-driven show with real characters who together narrate a story of inter-cultural family conflicts and how they can be overcome. With cast from varied cultures, our focus has been to recreate the real-life Bengali-Marwari divide to further build relatability among viewers. Kolkata is a melting pot of cultures and this is the first time that we are shooting here. Every bit of our experience has been enriching and we hope that the audience enjoy our narrative through the eyes of our protagonists.”

To promote the show, COLORS has chalked out a comprehensive 360-degree marketing campaign that includes on-air promotions, outdoor media, communications strategies and extensive digital initiatives. The campaign aims at driving concentrated engagement with the consumers via various mediums so as to create maximum buzz and eye balls for the show.

Swara and Ragini’s journey towards harmonizing their family’s feud will take over the small screen; starting March 2, 2015, every Monday to Friday at 9:30 PM only on COLORS!