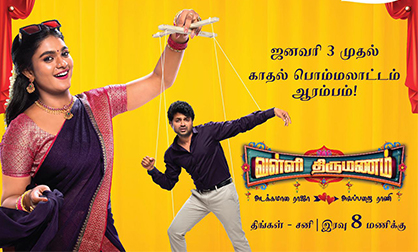 ~ Set to premiere on January 3rd at 8 pm, the show will telecast every Monday to Saturday ~

Chennai, 30th December 2021: Lord Murugan and Goddess Valli’s love story is one of the most famous in Tamil literature. Valli Thirumanam, Colors Tamil’s latest show, recreates this impassioned tale with a contemporary twist. The show is all set to premiere on January 3, 2022, at 8:00 p.m. Valli (played by Actor Nakshathra), an out-of-the-ordinary country belle who leaves no stone unturned for her loved one. Valli is the protagonist of the drama which has an intriguing storyline. Tune in to Colors Tamil on January 3, 2022, Monday, at 8:00 PM every Monday to Saturday to watch Valli fall in love and win over Karthik (essayed by Actor Shyam). 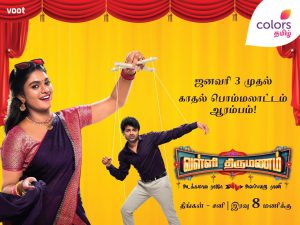 Commenting on the launch of their ambitious show, Mr. Rajaraman S, Business Head – Colors Tamil, said, “Colors Tamil is pleased to present Valli Thirumanam, which adheres to our philosophy of unique plotlines and inspiring storylines that have a social impact. It is about a strong woman who is a true personification of women’s empowerment. Valli epitomizes the independent women of the present era, who think and act of their own free will. With this show, we hope to promote a woman’s sense of self-worth while also showcasing her decision-making roles in the home. We are confident that Colors Tamil will appeal to all audiences alike, with Valli Thirumanam.” 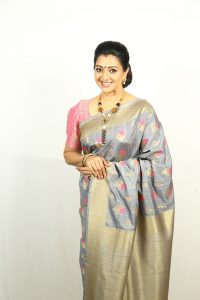 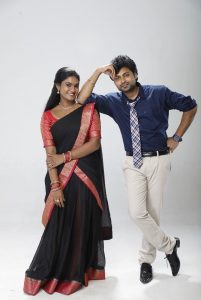 Set in the beautiful backdrop of Theni, Valli Thirumanam revolves around Valli, a warm-hearted woman moneylender, trying to make her place in the patriarchal world. Surrounded by people attempting to trick and betray her, Valli effuses a unique personality with her no-nonsense attitude and powerful demeanour, while camouflaging her kind and helpful nature beneath.

Karthik, on the other hand, is courteous and soft-spoken. He wants his better half to have the same attributes as he does. The plot is around how these two contrasting characters, who are diametrically opposed, come together and form a unique relationship. 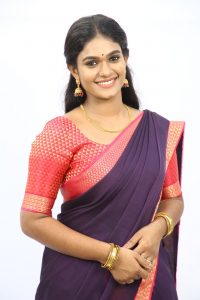 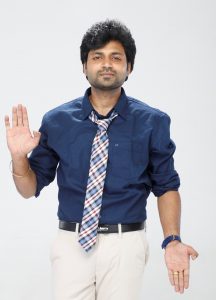 “I am happy to direct Valli Thirumanam as the show establishes a powerful facet of a woman,” director R Devandhiran stated. Valli, the main character, is brave and doesn’t hold back when it comes to expressing her opinions. It was an honour to direct such a talented cast. The scenic locations were an extra bonus. I am grateful to Colors Tamil for allowing me to be a part of this show.”

Commenting on the occasion, actor Nakshathra said, “I am proud to be part of Colors Tamil. The channel has broken preconceived notions and created a unique material, particularly by creating strong female characters for television. I’m even more thrilled to be portraying a strong, independent woman who is willing to speak up for herself. According to me, my role will inspire women to overcome their worries and speak their opinions.” 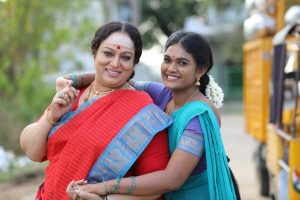 Similarly, actor R Shyam commented, “I am thrilled to be a part of Valli Thirumanam since the show’s plot is unique, with well-defined portrayals of relatable people.” Every character is important, and the show will certainly bring families together for a fun time.”

The channel has innovatively explored OOH as a dynamic medium by creating action movements to represent the protagonist Karthik as a puppet with the strings in the hands of Valli across various sites in Chennai. Additional larger than life cut-outs and audio-based innovations are executed in sites across Madurai district. In addition to OOH Innovations, a popular magazine print magazine is effectively being used as a story-telling medium through Belly Band Innovations. These are sure to pique viewers’ interest while also capturing the show’s romance and drama themes. The hashtags #ValliThirumanam #ValliVeraMaari #AlapparaRani #AdakkamanaRaja have been used to promote this on the channel’s social media accounts.

Tune in to Colors Tamil this Monday, January 3rd, 2022 at 8 pm, to watch Valli and Karthik’s unconventional story unfold. Colors Tamil is available on all leading cable networks and DTH platforms – Sun Direct (CH NO 128), Tata Sky (CHN NO 1515), Airtel (CHN NO 763), Dish TV (CHN NO 1808), and Videocon D2H (CHN NO 553). Viewers can also tune in to VOOT any time to see Colors Tamil shows at their convenience.