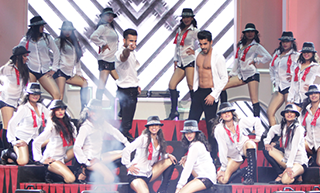 ~ KJo, Manish Malhotra, Dabboo Ratnani and Shilpa Shetty handpick the most stylish in the television industry ~

Style – a fundamental essential in Tinsel Town – was celebrated in the form of a glamourous evening on Friday, March 13th. For the first time ever, COLORS launched a fresh award concept along with the reigning queen of the television industry, Ekta Kapoor and her production house Balaji Telfilms. Television Style Awards, a plush sundowner, was enjoyed by the who’s who of the entertainment industry. The evening recognised fashionistas in the television industry who have created a buzz with their style statements, both on-screen and off-screen. While notable names from the fashion world such as filmmaker Karan Johar, ace fashion designer Manish Malhotra, diva Shilpa Shetty and celebrity photographer Dabboo Ratnani were on the jury for the function, Manish Paul and Karan Johar tickled the audience’s funny bones with wit and humour as hosts for the evening. The red carpet witnessed A-listers from both, B-town and the small screen industry. Abuzz with eminent faces such as Ekta Kapoor, Karan Johar, Shilpa Shetty, Kalki Koechlin who was seen in Margharita With A Straw, Manish Paul, Jeetendra, Sidharth Shukla, the red carpet for the evening was brimming with panache.

Even as the performances enthralled the guests of the evening with much entertainment, the show revolved around the theme of style and the element was omnipresent across all acts. The evening culminated into a finale act as the most prominent Balaji faces came together to commemorate the occasion. Style was rewarded as Ronit Roy (Style Icon), Radhika MadanShakti Arora (Most Stylish Jodi), Divyanka Tripathi-Surbhi Jyoti (Trendsetter of the Year), Sidharth Shukla (Most stylish leap from TV to films), Siddharth Nigam (Most Stylish Debut), Spandan Chaturvedi (Most Stylish Nanhe Natkhat) amongst others flashed their pearls at being noticed for their fashion statement! The Show will air on COLORS in April 2015.