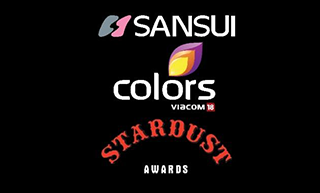 Mumbai, December 15, 2015: The biggest and the most credible #SansuiColorsStardust Awards to be held on 21st December in Mumbai. The most celebrated awards ceremony of the year, the Sansui COLORS Stardust Awards 2016 is back with its 13th edition. With a promise to set a new benchmark for celebration of cinematic talent, the prestigious Awards ceremony will honor the best and the exceptional performances of the Indian film industry for the year 2015, across 33 categories. With the entire Indian film fraternity coming together, the Sansui COLORS Stardust Awards will take place on-ground on, 21st December 2015 in Mumbai and will air on COLORS in the New Year.

Known for their outstanding humor quotient, the evening will be hosted by Abhishek Bachchan and Ritiesh Deshmukh along with co-host Farah Khan.

Commenting on this year’s awards Raj Nayak, CEO – COLORS said, “Last year we partnered with the biggest names in the Consumer Electronics and Publishing Business i.e. Sansui and Stardust to launch The Sansui Colors Stardust Awards. This partnership of three leaders went on to make the Sansui Colors Awards the No. 1 Awards show on Indian Television. This year based on feedback from all stakeholders in the Industry we have re-looked at the categories to make it more credible and robust. Our aim is to make the event exceedingly significant, entertaining and colossal this year.”

Recognized as the year’s first viewer’s choice awards of great prestige, and the most awaited acclaim amongst the industry experts, The Sansui COLORS Stardust Awards will commemorate actors, producers, musicians, technicians and the new talent within the industry for showcasing extraordinary performances and for their contribution towards making 2015 a celebrated year for Indian cinema. The categories will run across genres including action, drama, romance, comedy and above and beyond the conventional to recognize some exceptional work.

Talking about the association with Stardust, Mr. Amitabh Tiwari, COO, Sansui said, “Entertainment and Sansui have gone hand-in-hand for many years. Through our continued association with Stardust and COLORS, we are looking forward to furthering our belief in providing the best options to viewers. The Sansui COLORS Stardust Awards night promises to be a sensational evening with the biggest names from entertainment joining us in celebrating Indian films and its global outreach.”

Speaking about the awards, Nari Hira, Chairman – Magna Publishing Co. Ltd. said, “If last year’s scale and grandeur was top-notch, we are all set to surpass all benchmarks and make this new edition an even bigger entertainment extravaganza. 2015 has been an outstanding year for Indian cinema and we are looking forward to paying homage to the stalwarts whose showmanship has added to the industry’s success not only in India but also internationally.”

About ‘COLORS’
‘COLORS’ is Viacom18’s flagship brand in the entertainment space in India. A combination of ‘emotions’ and ‘variety’, COLORS launched on 21st July 2008 offers an entire spectrum of emotions to its viewers. From Fiction shows to Format shows to Reality shows to Blockbuster Movies – the basket contains all ‘JasbaatKe Rang’. ‘COLORS’ is dedicated to promoting ‘Cohesive viewing’, through programmes like Shastri Sisters, SasuralSimarKa, BalikaVadhu – Kacchi Umar KePakkeRishtey, Udann, Meri Aashiqui Tum Se Hi, Uttaran, ChakravartinAshokaSamrat, Bigg Boss, Comedy Nights With Kapil, 24, The AnupamKher Show – KucchBhi Ho Sakta Hai and KhatronKeKhiladi amongst others.

About Sansui
Sansui started its India operations in year 1997. From a small company in the entertainment industry, owing to its ground breaking technologies, today Sansui prides itself in being a house-hold Consumer Electronics Brand in India. Sansui is one of the most loved brands in the country, with a reputation for new age technology and excellent after sales service. In India, Sansui has marked its presence across all major towns and cities in the country.
As the world moved from CTVs to DVDs to Slim TVs, Smart TVs, LCDs and LEDs, Sansui has emerged with the latest superior technologies like STRATA certified Audio Systems, 4000 Billion Color, 14 BIT Video Processor, Dual Core Processor, FAROUDJA Audio & Video Optimized for its LED range. With consistent dedication to quality, technology and unmatched customer satisfaction, Sansui ensures a life enriched with innovation.