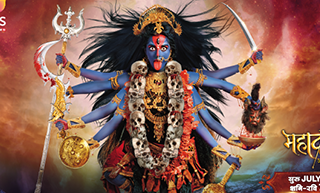 ~ Witness the epic transformation journey of this primordial goddess starting 22nd July 2017,
every Saturday and Sunday at 7:00 PM on COLORS ~

Mumbai, 11th July 2017: Revered as the divine mother, feared as the dark and ultimate destroyer; a serene wife or an angry, uncontrollable force? What is her real story? What led to Goddess Parvati taking on the ferocious avatar of Maa Kaali? Committed to championing and propagating content highlighting tenacious women, COLORS launches Mahakaali: Anth Hi Aarambh Hai. Extending the weekend primetime slot, the show traces the epic story of Goddess Parvati’s metamorphosis into Maa Kaali, a fierce shakti who is misconstrued as an all-consuming destroyer. Featuring actors Pooja Sharma and Sourabh Raaj Jain in lead roles of Kaali and Shiva, Mahakaali: Anth Hi Aarambh Hai will delve into the pages of Indian mythology to reveal what makes Maa Kaali untameable and limitless. Produced by Siddharth Kumar Tewary’s Swastik Productions, this mytho-drama will premiere on 22nd July 2017 and air every Saturday and Sunday at 7:00 PM on COLORS.

Speaking about this new offering, Manisha Sharma, Programming Head – COLORS said, “We are excited about bringing forth trendsetting shows like Naagin which ruled the rating charts and the mystical Chandrakanta that has shown great promise. Now with a show like Mahakaali, we are extending the weekend primetime to depict the story of Indian mythology’s most feared and revered Goddess.  We at COLORS pride ourselves in great storytelling. Today’s Indian woman is fierce and unstoppable, but she doesn’t realise her own power and potential unless faced with adversity. Mahakaali’s story is our attempt to inspire women to know their true worth.”

A tale of self-realisation tracing the circle of justice, Mahakaali: Anth Hi Aarambh Haifocuses on bringing evil to its rightful end, to make way for righteousness and positivity. Starting with the furore that converts the demure Goddess Parvati into the aggressive Maa Kaali, the show will capture the many struggles that Parvati (essayed by Pooja Sharma) will experience as she accepts her fate as the merciless Maa Kaali and her other 10 devi avatars called, Dasham-Mahavidya. And, helping her along this journey will be her husband, Mahadev (played by Sourabh Raaj Jain). In his Shankar avatar, he will be Parvati’s biggest support system and guide as she discovers her destiny as the Aadi Para Shakti which makes her even more superior than the Holy Trinity of Brahma, Vishnu and Mahadev.

Producer Siddharth Kumar Tewary from Swastik Productions said, “Bringing alive the mystic imagery of Maa Kaali for the television viewers is no ordinary feat. Goddess Kaali has a deep purpose which is often overlooked and scarcely understood. We have worked tirelessly in creating a magnificent canvas which does justice to her ferocity and underlines the core reason of why she came into existence and how is it relevant to the viewers today. We are utilizing high-end VFX and prosthetics to highlight the fantastical element in the story, in keeping with the mythological era. Intense research has led us to the ideal depiction on-screen, and we hope that the viewers like Mahakaali as much as they have supported Karmphal Data Shani.”

Commenting on essaying the dual roles of Goddess Parvati and Maa Kaali, actor Pooja Sharma said, “It’s difficult enough to play one mythological character and bring alive her charm and aura; I am challenged with two such characters – Parvati and Kaali Maa. Their contrasting personalities make the entire experience very enriching and satisfying for me, as an actor. While Parvati is calm and composed, Kaali is untamable…a destroyer of evil. I am really looking forward to my role and hope it proves to be a glorious one in my resume.”

Adding further, actor Sourabh Raaj Jain aka Mahadev said, “Unlike previous depictions, in this show Mahadev will be more tranquil and calm. Viewers will see Mahadev’s Shankar avatar wherein he will be the anchor and catalyst nudging Parvati towards accepting her destiny as Maa Kaali. Mahakaali: Anth Hi Aarambh Hai is very special to me because it creates an engaging narrative about a Goddess whose transformation remains a mystery till date. I am really excited to be back with COLORS and Swastik Productions, and am looking forward to the audience’s feedback and reactions to our show.”

Along with Pooja Sharma and Sourabh Raaj Jain, Mahakaali: Anth Hi Aarambh Hai will feature a stellar cast including actors Falaq Naaz as Goddess Saraswati, Nikita Sharma as Goddess Laxmi, Akash Kumar as Lord Brahma, Gagan Kang as Lord Indra, Abhaas Mehta as Shumbh, Danish Akhtar as Nishumbh, and Arjit Lavania as Nandi amongst many others

About VIACOM 18:
Viacom18 Media Pvt. Ltd. is one of India’s fastest growing entertainment networks and a house of iconic brands that offers multi-platform, multi-generational and multicultural brand experiences. A joint venture of Viacom Inc. and the Network18 Group, Viacom18 defines entertainment in India by touching people on air, online, on ground, in shop and through its cinema.