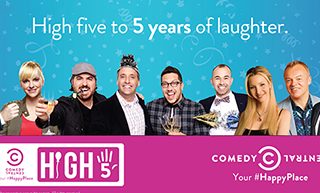 ~To celebrate the 5th anniversary, the multi-platform Comedy Central, is also set to launch exclusive South Park merchandise for its fans~

National, 23rd January: Comedy Central launched in India on 23rd January 2012 and has grown to be India’s No.1 English Entertainment Channel and a multi-platform brand offering best ever consumer products and on-ground events such as the Chuckle Festival. Comedy Central has today become one of the most preferred channels for advertisers, across Automobiles, Ecommerce, FMCG and Electronics categories. By providing the best of television content from four of the biggest studios- NBCUniversal, Warner Bros, Sony Picture & CBS. Comedy Central enjoys a viewership of over 67 million and is No.1 on social media platforms in its genre.

Giving a High5 to all its fans on its fifth anniversary, the multi-platform Comedy Central is all set to celebrate in style. With something for everyone, such as – a pro-social campaign Comedy Central Spread the Cheer – a unique initiative to spread happiness in places you least expect, exclusive collection of South Park merchandise for die-hard fans and a world preview of the latest season of SUITS for its viewers – along with a host of other exciting activities on offer!

Commenting on the anniversary, Ferzad Palia, Head Youth & English Entertainment Cluster, Viacom18, said, “When we launched Comedy Central five years ago, we were entering into completely virgin territory. Seeing how the channel has now grown to become the country’s No. 1 English Entertainment channel and a multi-platform brand is proof that quality entertainment will always be appreciated – and I’m not just talking about the viewers who keep coming back for more but also the advertisers who keep believing in us. Staying true to our commitment this year, we plan to focus on bringing the latest seasons of our popular shows and spreading cheer with our initiatives.”

In the second edition of Comedy Central Spread the Cheer, Comedy Central aims to take its signature brand of happiness to the differently-abled, through a special combination of on-air programming and off-air initiatives. In partnership with The Rotary Club, Comedy Central will upgrade the education infrastructure for the visually-impaired in 3 schools – Hellen Keller Institute, Victoria Memorial School for the Blind and NAB Centre. This initiative will empower over 500 visually-impaired youth every year, making them employable under the Government’s quota for the differently-abled.

The channel has partnered with well-known brands like Costa Coffee, Gold’s Gym, Mad Over Donuts, Kidzania and Radio One to roll out special initiatives for the differently-abled across more than 100 outlets and help spread awareness. The channel has also partnered with Give India, enabling the viewers to join the movement and contribute in their own way. As a special gesture, the channel will also be taking 100 differently-abled kids to spend a day at KidZania, Delhi. Viacom18 is all set to make Vh1 Supersonic – India’s first ever fully accessible music festival. Thanks to its college-connect program, some reputed educational institutes will also upgrade their infrastructure and conduct workshops. Comedy Central is also exploring ways to showcase the achievements of differently-abled sportsmen and other achievers, through radio and social media, to encourage the community.

Comedy Central fans will also get a chance to attend a BEFORE-THE-WORLD Premiere Party for the post season-break episode of one of Comedy Central’s most popular shows, Suits S06, in Mumbai and Delhi at Summerhouse Café and Monkey Bar at Bangalore on 25th January.

On Digital media, Comedy Central will host an epic boomerang video contest, where viewers can show off their moves with a 5-step dance, to celebrate the channel’s birthday and win exclusive official merchandise!

All this over and above Comedy Central’s fabulous Birthday programming, including the best episodes of its 5 most beloved shows – Penn & Teller: Fool Us! In Vegas, Brooklyn Nine-Nine, Citizen Khan, Mom, Whose Line Is It Anyway? from Monday to Friday at 8 PM. On Sundays, treat yourself to a 10-hour marathon of Impractical Jokers and F.R.I.E.N.D.S. (all 10 seasons). So all screens will point to the only #HappyPlace on television!

Join the most happening birthday bash of the year because this is the High5 that you definitely want your hands on!

About Viacom18:
Viacom18 Media Pvt. Ltd. is one of India’s fastest growing entertainment networks and a house of iconic brands that offers multi-platform, multi-generational and multicultural brand experiences. A joint venture of Viacom Inc. and the Network18 Group, Viacom18 defines entertainment in India by touching the lives of people through its properties on-air, online, on ground, in the shop, and through cinema