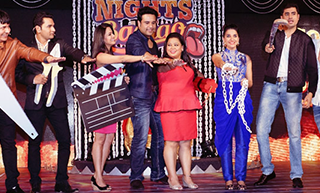 ~ Celebrity Guests to get humorously uncomfortable in a comfortable environment ~

~ Premiering on September 5th at 10PM on COLORS, Comedy Nights Bachao will crack-up your weekends like never before ~

Mumbai, 26th August, 2015: How must it feel to become a laughing stock on National Television? Especially so if you happen to be a well-known public figure?! And the absurdity of it all is that you still decide to jump into the bandwagon knowing fully well that your well preserved personality will be assassinated, albeit in a humorous way. With an all new concept for the Hindi General Entertainment Channel viewers, COLORS is set to expand its comic genre offerings with a new show called, Comedy Nights Bachao! Building on the genre of ‘insult comedy’, Comedy Nights Bachao will take jibes at famous and infamous celebrity guests at the hands of actor-comedian jodis through acid-tongued humor. Produced by Optimystix, the uproariously funny panel of comic assassins will descend on your television screens on September 5th, every Saturday at 10PM on COLORS.

Commenting on the extension of the Comedy Nights franchise, Raj Nayak, CEO – COLORS, said, “They say comedy is a serious business and we have realized it is indeed a serious one. As a progressive channel we keep a tab on the evolving taste of our viewers and thus have identified the various elements of hilarity that makes them tick. Through Comedy Nights Bachao, we are foraying into a new genre of comedy which is getting extremely popular. We are thankful to all the guests who have been sporty enough to participate in the show and laugh at themselves without bothering about their public image. With this new brand of humor, we hope to redefine the comedy genre altogether. The laughter quotient will just double up now on COLORS with Comedy Nights Bachao and Comedy Nights With Kapil.”

Elaborating on the show’s format, Manisha Sharma, Programming Head – COLORS, said, “Comedy as a genre has yet to be exploited to its full potential in India, and a new brand of comedy is the need of the hour. There is a whole new rapidly-developing genre of insult comedy which has been grabbing eyeballs lately. Through Comedy Nights Bachao, we are looking forward to curate a daring enterprise adding a new dimension of wit. We will be putting an eclectic mix of celebrity guests in the spotlight as actor-comedian jodis target them with carefully put together comic gags while raising the laughter quotient on a weekly basis.”

Said the Producer, Mr. Vipul D Shah of Optimystix Entertainment India Pvt. Ltd, “Distinctive and sustained Comedy is our strength at Optimystix. We feel we are a bunch of jokers who love to make people laugh. Comedy Nights Bachao is a unique show and will prove to be an extremely entertaining one. With a huge platform like COLORS we feel this genre of Comedy will get its apt viewers.”

The channel has lined up widespread ATL and BTL activities in all key markets for the promotion of the show. The digital activities will primarily revolve around the subjects – ‘Bachao’ and ‘Bajao’. On Twitter, viewers will be asked to share mean jokes about the hosts of the show. The best jokes will be then recorded in a one minute video and posted on Facebook. Viewers will be also asked to send in their innovative ideas of welcoming and handling unwanted guest with the hashtag #MehmaanNawazi. On the Dubsmash app, a section of famous insult dialogues from Bollywood/Hollywood movies will be created which the users can use to bajao someone. After the celebrity guests have been bajao-ed by the comedians on-air, the audience will be given a chance to add to it on Twitter via the hashtag #JalePeNamak. On Instagram, users will be asked to send in their own original ‘insult’ for a celebrity.

With the launch of Comedy Nights Bachao, COLORS now offers two distinct entertainment avenues to its viewers to enjoy laughter and hilarity to its full potential. While Comedy Nights With Kapil will continue to enthrall viewers through its engaging format, Comedy Nights Bachao will coin a new definition in the textbooks of entertainment as an innovative offering with a distinctly personal angle and ability to make celebrity guests squirm in their seats and viewers squeal with delight!