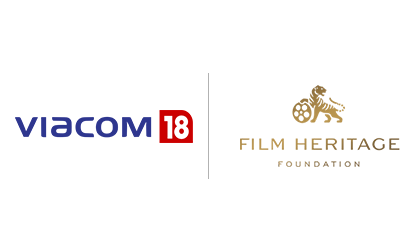 September 24, 2018; India: Celebrating a century of Bengali cinema, Viacom18 and Film Heritage Foundation (FHF) announces the 4th Film Preservation & Restoration Workshop India 2018 (FPRWI) in Kolkata. After successfully partnering with the FHF for the past 3 years, supporting the workshop in Mumbai, Pune and Chennai, the objective of FPRWI 2018 is to create awareness on the urgent need to preserve the moving image heritage in the Bengali film industry thereby, making it accessible to global audiences. Applications for the week-long workshop are currently open on http://filmheritagefoundation.co.in/film-preservation-restoration-workshop-india-2018/

Speaking about the Film Preservation & Restoration Workshop, Sudhanshu Vats, Group CEO and Managing Director Designate, Viacom18 said: “India is a country of epic tales that weave through every aspect of our life. Our cinema has been one of the foremost tools of bringing these stories to form our nation’s collective consciousness, across regions and languages. For close to two and a half decades, starting circa 1950, Bengali cinema moulded this collective conscious as it saw a galaxy of talented directors, actors and musicians shape not only the region’s cinema but also setting the narrative for progressive Indian cinema. Personalities like Satyajit Ray, Ritwick Ghatak, Mrinal Sen, Uttam Kumar, Aparna Sen, Sharmila Tagore et al not only were revered throughout the world as film personalities but also shaped the discourse of socio-political culture both within and outside of India. Their works define our times and as such it is imperative that we preserve and restore them so that the generations to come appreciate our rich cultural heritage. It is this single philosophy that prompted us to partner Film Heritage Foundation through the last 3 years and after Maharashtra and Tamil Nadu, bring the Film Preservation & Restoration Workshop to the Bengali film industry.”

FPRWI will focus on the need to skill and train a resource of archivists to take on the challenge of preserving and archiving film heritage. The workshop will take place in Kolkata, India from November 15 – 22, 2018 at Rabindranath Tagore Center and will have participation from India, Sri Lanka, Nepal, Bangladesh, Bhutan, Myanmar and Malaysia. In addition to the workshop, daily screening sessions of restored classics will take place at Nandan and Rabindra Sadan in Kolkata.

Speaking about bringing the workshop to Kolkata this year, Shivendra Singh Dungarpur, Founder, Film Heritage Foundation said, “When we conducted the first film preservation and restoration workshop in Mumbai in 2015, people were not aware that films needed to be preserved. I am proud to say that after having conducted these workshops in Mumbai, Pune and Chennai over the last three years in partnership with the International Federation of Film Archives (FIAF), we are already seeing the impact. Selecting Kolkata as a venue for our fourth workshop was a foregone conclusion with Bengal being the jewel in the crown of India’s film heritage. Unfortunately, very little survives of this precious legacy. “Jamai Babu” (1931) is only one Bengali film of the silent era that survives. We hope to change this scenario by creating awareness and building capability. What is truly incredible about this workshop is that 30 students will get to do the course absolutely free of cost.

If urgent steps are not taken these films will be just faint memories from another time and the generations to come will forget the existence of the great artists who came before and from whom we learned so much.”

FPRWI is considered to be the most comprehensive workshop of its kind, and has become a model for the International Federation of Film Archives (FIAF) for its international training programs. The workshop is certified by FIAF and is designed to cover the subject through theory and practical sessions with detailed insight about the best practices of preservation and restoration for films and film-related paper and photographic material. The 2018 edition of the workshop will introduce a fresh format where in the selected participants will be given an opportunity to choose an area of specialization from 4 broad categories including Film Handling and Repair, Digital Preservation and Restoration, Cataloguing and Paper, and Photographic Conservation. The workshop will also have a practical session with the latest and world class ARRISCAN XT giving participants hands-on training on film scanning.

FPRWI 2018 will be conducted by a faculty of international experts from leading institutions around the world including:

Applications for the 2018 workshop are open until October 7, 2018. Selected applicants will be notified and scholarships will be presented to deserving local and international candidates.