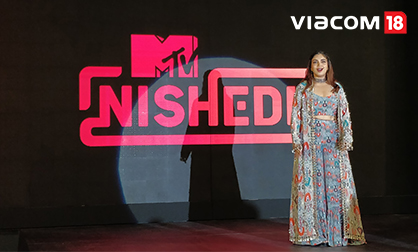 National, 16th January 2020: SEX, CONDOM, ABORTION, TB. Whenever, these words are spoken out loud, all we do is hush. While young Indians are open and forward in their outlook, there is still hesitation to talk about these issues. But come January 25th, MTV is urging you to speak out loud on all things taboo and break the stigma with its new slice-of-life series MTV Nishedh. As India’s No 1 Youth Brand, MTV has always spoken about social taboos unabashedly. With MTV Nishedh, the brand takes its clout a notch higher to bring to light conversations on what have been, so far, topics shackled in societal norms.

With stories centered around some of the most critical yet taboo social issues such as modern contraception, medical abortion, consent, tuberculosis and nutrition, MTV Nishedh, produced by Victor Tango, will air on MTV starting 25th January, every Sat-Sun at 8PM. The show will also air on Colors Rishtey starting 1st Feb onwards every Saturday- Sunday at 10:30 pm and is available to stream on VOOT.

Owing to the strong social messages it communicates, Bhumi Pednekar has come on board to as a cause ambassador for MTV Nishedh. Bhumi Pednekar said, “We now live in an era where the youth is brave and unafraid to stir change. The world is grappling with integral health issues that need a voice and MTV Nishedh comes in right there. Through relatable and close to life characters, this show answers some pertinent questions on issues like modern contraception, medical abortion and TB. This is an opportune time for Young India to talk openly and I am glad to associate with MTV Nishedh as a cause ambassador. I look forward to doing my bit to brush off stereotypes, raise awareness and drive positive change.”

Acclaimed singer and the first Indian female vocalist to collaborate with UN for women empowerment, Neeti Mohan has also come forward as the cause supporter by rendering her voice for the show anthem #KhulKeBol. Produced by Indian music composer Chirrantan Bhatt and lyrics by Manoj Yadav, the song is a powerful call out to the youth to liberate themselves. Neeti Mohan added, “Music has the ability to express thoughts and emotions. For a powerful cause-driven show like MTV Nishedh, #KhulKeBol will bring voice to it.”

Sudhanshu Vats, Group CEO and MD, Viacom18 said, “I’ve always believed that doing good is good for business. We have, since inception, created content on social causes and built a successful broadcast business around it – from Balika Vadhu to Shakti to Laado – we have covered a gamut of socially sensitive issues through our TV content. Furthermore, through our youth brand MTV, we continue to create multimedia campaigns, over and above our TV shows, that highlight various social themes. We have explored issues as diverse as women’s empowerment to sanitation through our films like Queen and Toilet: Ek Prem Katha. This business philosophy of doing good was underscored last year when BMGF worked with us to bring forth a behaviour change content series called Navrangi Re! on the issue of Fecal Sludge Management. The sheer number of social organizations and like-minded corporate who are partnering us to launch MTV Nishedh bears testimony to its scale.”

Georgia Arnold, Executive Director of the MTV Staying Alive Foundation said, “MTV Nishedh marks an exciting point in The MTV Staying Alive Foundation’s journey. Bringing the highly successful MTV Shuga model to India facilitates young Indians to take up more space on issues affecting their everyday lives. The power of MTV Nishedh is in its reflection of real life – we engage young people in all stages of its development to ensure the stories are relatable, entertaining, and highly engaging. Crucially, all of our content drives the audience to health services where they can receive valuable help. We believe MTV Nishedh has the potential to be a genuinely relevant cultural asset, as well as a successful public health campaign.”

The universe of MTV Nishedh is being brought to life by popular young TV faces like Priya Chauhan Shivam Patil, Malhaar Rathod, Gautam Vig, Syed Raza Ahmed, Himika Bose, amongst others who will feature in the show.

Actor Malhaar Rathod, who plays the role of Aastha said, “MTV Nishedh looks strongly at issues that have been brushed aside for too long in ignorance. My character is challenging and unravels many aspects of the young woman of today. The show gives voice to concerns that are suppressed by patriarchal conventions with a narrative that engages and relates to the youth. I think MTV Nishedh will be an eye-opener in the fiction genre.”

Actor Priya Chauhan, playing the role of Megha on the show, said, “Underlined by lighthearted stories and a tinge of humour that binds few lives, MTV Nishedh conveys a significant commentary on topics that concern our well-being. In a nation bustling with young population, its high time we sideline taboos and make issues like contraception, medical abortion and TB more conversational and accommodating. I hope Nishedh is a huge leap in that direction.”

Syed Raza Ahmed, who plays Vicky said, “Given the health issues India is grappling with and the lack of awareness that continues to exist, there couldn’t have been a better time to come up with MTV Nishedh. I was surprised to hear that India has the highest burden of TB in the world but what was more surprising is very few people know about it. Hence, I feel with Vicky’s character I am helping create awareness and remove stigma surrounds TB.”

With themes around love, ambition, empowerment, family and health, MTV Nishedh, produced by Victor Tango aims to educate and entertain through powerful stories using youth as the catalyst of change. Starting 25th January, be a part of change. Khul Ke Bol only with MTV.

MTV, the world’s premier youth brand, is a dynamic and vibrant blend of music and pop culture. With a global reach of more than half-billion households, MTV is a cultural home to the millennial generation, music fans, and artists.  50 MN fans following MTV across show pages on social media have made it one of the top brands in social influence as well. MTV consumer products are available across 35+ unique categories through strategic brand licensing tie-ups, leading to combined retail sales of 100+ crores present across all key online and off-line channels of distribution. In 2015, MTV also launched its first-ever café in the world, FLYP@MTV in New Delhi in India. MTV has a buzzing MTV Live business with properties like MTV Video Music Awards and MTV Bollyland. Aiming to entertain, lead and collaborate with young people through its evocative communication and youth relevant shows like Roadies, Splitsvilla, Coke Studio@MTV, MTV Unplugged, MTV Girls on Top, MTV Love School and keep them engaged through various cause led initiatives such as MTV Rock the Vote and MTV The Junkyard Project. For information about MTV in India, visit www.mtv.in.com

The MTV Staying Alive Foundation is a media movement using storytelling to save lives. It creates and distributes game-changing health and well-being content across MTV channels and third-party broadcasters. Its key campaign is MTV Shuga – a multi-award-winning campaign based around a sex and relationships TV drama. The MTV Staying Alive Foundation is supported by ViacomCBS Networks International (and Viacom 18) through the in-kind support they give to the organisation as well as the use of the MTV brand.

Viacom18 Media Pvt. Ltd. is one of India’s fastest-growing entertainment networks and a house of iconic brands that offers multi-platform, multi-generational and multicultural brand experiences. A joint venture of TV18, which owns 51%, and Viacom Inc., with a 49% stake, Viacom18 defines entertainment in India by touching the lives of people through its properties on-air, online, on-ground, in-shop and through cinema.