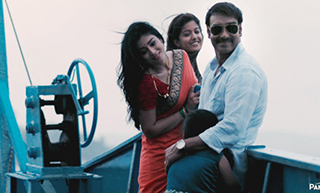 The first look poster of DRISHYAM had many struck by its distinctive content and generating a high amount of curiosity amongst the audiences, compelling them to think what Drishyam is all about.

The Motion Poster of Drishyam went viral in just a few minutes from launch and film has had positive critical reviews throughout the country. With the affirmative word of mouth and the opening weekend box office blitzkrieg, the figures are expected to grow throughout the week.

Clearly the verdict is out, people have loved and enjoyed the film and seeing their beloved actors in their common man avatar coupled with the striking power packed performances given by Ajay Devgn & Tabu, Drishyam is poised to be one of the breakthrough movies of the year!!