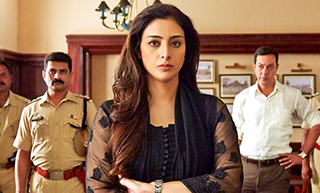 Ajay Devgn, known for his hard hitting performances in films like Zakhm, Omkara, Gangajal and Singham returns this year with his solo release – Drishyam. The first look and trailer of this upcoming thriller has left the audiences intrigued and riveted, heightening anticipation for its July 31st release.

Essaying the role of 4th fail Vijay Salgaonkar, Ajay will be seen delivering an intense, power packed performance in his all new common man avatar that is being appreciated far and wide. Tabu, known for her performance driven roles adds more power to the film as IG Meera Deshmukh, a tough female top cop. In the year where content led cinema is driving viewers to the cinema hall, Drishyam with its promise of a gripping narrative and superlative performances is one of the most awaited movies of the year.

The makers launched the trailer in a unique way by introducing an alluring game on social media, which has a few levels where the gamer needs to find clues and answers which eventually leads to Vijay’s journey in the film. Unfolding the game’s mystery helped the gamer to get an insight on the trailer way before it’s launch!

This out-of-the-box concept of a trailer launch was widely acclaimed by the audience and it went viral in no time. Receiving a phenomenal 1 million hits in a span of 24 hrs, the trailer further went on to score a million hits and counting across other social media platforms too

A Viacom18 Motion Pictures and Panorama Studios Production, Drishyam is directed by Nishikant Kamat and releases on July 31st.