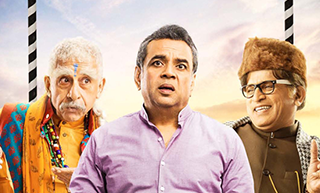 Mumbai: Neel Bhakt Paresh Rawal, the man who has had Indian audiences in splits every time he’s seen on screen is back to lead the stellar star cast in upcoming film Dharam Sankat Mein. From Viacom18 Motion Pictures, the studio that produced OMG – Oh My God comes yet another hilarious satire with Naseeruddin Shah and Annu Kapoor that will see Dharampal being forced to follow the hilarious Neelanand Baba and his quirky Neel eccentricities.

Taking a leaf from Neelanand Baba’s book and his ‘Neel’ eccentricities, the makers of the film have launched a whole “Neel Dharam” effectively making this a 360 degree marketing tool. Designed to be devotedly funny, the Facebook Page offers the countdown to the Neel Satsang, excerpts from the Neel Granth, a video that demonstrates the Neel Pranam and so much so as a Neel Anthem which is both groovy and funky. This will further make impact on radio as a platform with the play out of the Neel Anthem across key radio channels.

In select multiplexes, the on-ground leg of the campaign engaged audiences with a registration desk wherein audiences could subscribe to become Neel Bhakts. Cyclists on their Neel Vahaans wearing Neel (blue) robes were spotted in various localities of the city, evangelizing the commandments of the new age spiritual path with a life-size cutout of Neelanad Baba, installed in the city and bathed in milk. Spread across five metros, the activation was conducted across 50 locations over a span of 10 days.

Elaborating on the same, Rudrarup Datta – VP, Marketing at Viacom18 Motion Picturessaid, “Dharam Sankat is one of the funniest social satires this year. We wanted to create a quirky marketing campaign that is out of the box yet one that reflects the wit in the film. Neelanand Baba and his in-your-face hilarious antics are sure to get your attention. Make sure you check out the coolest Dharam in town!”.

Viacom18 Motion Pictures is India’s finest fully integrated motion pictures studio that has emerged as a force to reckon with by delivering a stream of critically and commercially successful films. Offering differentiated and meaningful cinema, some of its iconic releases have been Queen (2014), Mary Kom (2014), Bhaag Milkha Bhaag (2013), Madras Café (2013), Special 26 (2013) and Kahaani (2012) to name a few. Viacom18 Motion Pictures is also one of the few studios to have successfully ventured into regional films across languages like Bengali, Marathi, Punjabi and from the South. The Studio has also backed path-breaking and much-appreciated creative work in the form of hits like Bombay Talkies, Gangs of Wasseypur I and II, OMG – Oh My God!, Manjunath, Shaitan, That Girl in Yellow Boots, Pyaar ka Punchnama, Inkaar, Saheb, Biwi Aur Gangster Returns and  Boss amongst others.